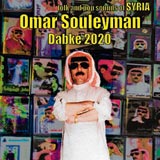 Despite its status as a junior member of George W. Bush’s “Axis of Evil,” Syria has long been a junction between East and West. It was on the road to Damascus, after all, that Paul famously converted to Christianity. But in recent times, both the repressive al-Assad regimes and America’s suspiciousness have prevented Syrian culture from filtering out. Perhaps that’s why these two releases by vocalist Omar Souleyman — who, among other regional styles, performs dabke: Syrian party music characterized by frantic synthetic beats — are so revelatory. Last year’s Highway to Hassake (reissued on vinyl this year) and Dabke 2020 are drawn from hundreds of tapes released in Syria. Given the plaudits his first-ever performances in Europe received this past June, it’s not far-fetched to hope that he will soon find his way to America.