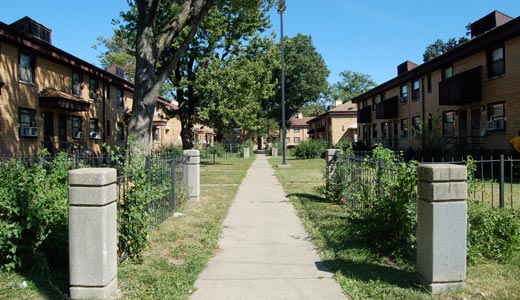 Living in public housing wasn’t something Keishanna Hughes planned, but with four small children and skyrocketing rent there was little choice. She was placed in the city’s largest housing project, Beecher Terrace, a 760-unit complex near downtown.

Not long after moving in, however, she was pleading with her landlord to let her break the lease.

“They moved me in a bad area,” she says. “There were teddy bears in the yard next door for somebody who just got killed. Every day they were having dice games. There was always something going on.”

A drug dealer set up shop on her front porch and when she complained, he brandished a pistol, saying, “Girls are going on T-shirts too.” The implication was that she might end up pictured on a piece of clothing with R.I.P. air-brushed across the top, a ubiquitous memorial following a homicide.

Fearful and traumatized, she asked for an immediate transfer to another complex, and soon she was relocated to an apartment in the smaller Sheppard Square housing project in Smoketown. It was a nice block that residents refer to as “Melrose Place” because it is relatively peaceful.

It’s now been five years since Hughes moved into Sheppard Square and she hasn’t experienced any trouble like she did at Beecher. The young mother works across the street as an administrative assistant at the Presbyterian Community Center, where her children take part in the center’s after-school programs.

“I love this community,” she says. “It’s totally different from any I have lived in.”

And so she is devastated by news that the city is seeking a $20 million federal grant to raze the historic housing complex and redevelop it into a mixed-income neighborhood.

If successful, this will be the city’s third public housing project razed with funds from the Hope VI program, which is meant to break up pockets of poverty by demolishing old barracks-style facilities.

For Sheppard Square residents, feelings are mixed following the city’s recent announcement. The split contingents agree the deteriorating facade needs improvements and various social ills plague the area, but there’s disagreement over whether tearing down the oldest African-American housing complex and scattering residents across the city is the best solution.

“Honestly, I don’t like it,” says resident Fred Campbell, who helped organize the Smoketown Softball League. “People are scared of losing their homes. If you’re being uprooted and told you have to move then you’re fearful. The city planners will do what they have to do, but Sheppard Square has always been a good place.”

On a recent afternoon visit to the complex, however, one resident who asked not to be named made her views clear: “I say tear the motherfucker down, and I say start on this end.” Several women sitting alongside her on the concrete porch nodded in agreement.

In past public housing redevelopment projects, the city has allowed only a portion of newly constructed housing to go toward rent-assisted units, meaning many low-income residents would have to relocate. The idea is to disperse clusters of impoverished residents.

Patricia Bell, president of the Smoketown Neighborhood Association, says she worries about where people will end up once redevelopment occurs, although she acknowledges public housing wasn’t meant to be a permanent residence for multiple generations.

“There are a lot of folks that kind of seem stuck and don’t feel they have a way out,” she says. “I lived in public housing before and I never thought that people should be clustered together like that, because everyone has that American dream.”

Located just blocks from the city’s medical district, a hop from a booming downtown and near the University of Louisville, the Smoketown neighborhood is prime real estate for city planners, a fact most residents seem to understand.

Although it is still unclear how the city will fund the remainder of the estimated $200 million development project, housing authority officials are moving forward with hopes that the city will receive the grant in February and begin work as early as next summer.

Louisville Metro Housing Authority Executive Director Tim Barry says roughly one-third of the new units will be public housing, and former residents will be at the top of the list. The occupancy criteria are being hammered out, but will likely resemble conditions of past projects, requiring things like criminal background checks and that residents be enrolled in school, job training or working if they are physically able.

“The residents would like to have better housing, but they’re approaching it with some trepidation, which is understandable because they’re the ones being imposed upon,” says Barry, adding the 67-year-old complex needs to be replaced. “But it’s just warehousing of people. The structure, the style, the mechanics and the materials used to build it are all outdated. The simple creature comforts you and I might enjoy, people don’t have.”

That explanation is a favorite rationale for city leaders, including Mayor Jerry Abramson and Metro Council President David Tandy, D-4, who represents the area. Other housing advocates, however, point out that if the facilities are the problem then there’s no need to add restrictions for residents to return.

In a statement, the Metropolitan Housing Coalition advocates building the replacement units first before tearing any down, requiring all replacement public housing units to have the same criteria as before, and increasing the number of rent-assisted units on site.

Keishanna Hughes says demolishing the previous projects did improve the lives of residents and the neighborhoods that are now Liberty Green and Park DuValle, but the city shouldn’t have to displace everyone to do that effectively. Since last month she’s been organizing residents and encouraging them to demand better treatment.

“There are good residents down here now even if they’re not working,” she says. “We’re going to fight for that to happen and push for a better outcome this time.”