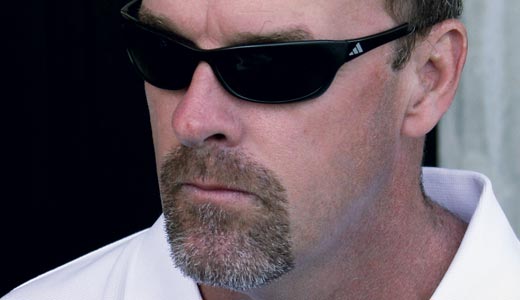 Cardinal fans frolicked out of Papa John’s Cardinal Stadium in a state of such ecstasy, many smiled tolerantly at the brewski-overloaded nabobs pissing in the bushes.

Maybe Howard Schnellenberger’s bluster was indeed more than boast. U of L had just sent the third-ranked West Virginia Mountaineers hightailing it back to Morgantown with wet powder and a jammed musket.

As pigskin planet’s population watched on prime-time Thursday, the Cards’ future route appeared in the headlights’ beams. That collision course with a national title jumped in front of Louisville like a deer on River Road.

A week later U of L’s hopes were roadkill. The Cards blew a 25-7 lead and lost to Rutgers. Instead of vying for a national title, they landed in the Orange Bowl, registering a tepid win over Wake Forest. Supercoach Bobby Petrino jumped to the pros.

Louisville hasn’t been a blip on the national radar since.

That November night seems so long ago, far away.

With Steve Kragthorpe’s make-or-break season kicking off this weekend, Cardinal fans remain in shock at the precipitous fall from grace. Is that all there is? If not, what will it take to claw back into the national conversation?

Saturday’s opening encounter with Indiana State is of such little consequence the klieg lights of college football’s main stage won’t even be visible.

The Sycamores have been seriously inept of late. I asked three Cardinals fans if they were aware how few wins Louisville’s opening foe has garnered in the last 50 games. All three, including one who is the rarest of creatures — a football fan who truly loves both U of L and UK — answered the same.

“You mean Indiana State has won only one game in their last 50?”

Actually, 1-50 is Indiana State’s record for their last 51 gridiron battles. Few have been close.

Which means Louisville should win handily, even if defensive lineman L.T. Walker were to line up under center, instead of Justin Burke.

Which doesn’t mean it won’t be a test for the beleaguered Kragthorpe, at least in the eyes of restless Louisville fans, if not those of Athletic Director Tom Jurich. His public stance has been one of unwavering support for his coach, who is 11-13 in two seasons here.

But anything short of a full cavalry massacre of the Sycamores will be met with consternation by Cards fans. Archrival Kentucky is U of L’s next foe, after a week off following the opener. If Louisville falls in Lexington, and doesn’t surprise Utah a week later, it’ll be send-grannie-to-the-cellar-and-cover-your-ears time. The chat rooms and call-in shows will be no place for the meek.

Louisville’s saving grace this year could be the weak Big East. If the Cards somehow get a hum going, they could fare respectably in conference play. Then again, so would Trinity and St. X.

The Cardinals’ strengths are at running back, where four of the five leading rushers return, including Victor Anderson. And with the receiving corps, where last season’s top-five wideouts are all back. On the other side of the ball, the three leading tacklers return: linebacker Jon Dempsey, along with Dan Covington and Johnny Patrick. If the latter two, a corner and a safety, make that many tackles this season, it will mean the front seven in the 4-3 are still a problem. Quarterback, the line on both sides, and the defensive secondary remain serious question marks.

So, too, remain questions of Steve Kragthorpe’s abilities as a head coach and offensive coordinator.

The over/under on U of L victories this season is probably 3 1/2. Wins at UConn, Cincinnati, West Virginia and South Florida, while not impossible, are improbable. Beating Sugar Bowl champ Utah would classify as the national upset of the season. Southern Mississippi is being heralded as this campaign’s possible breakthrough BCS buster. Dave Wannstedt might actually have turned it around at Pitt. Rutgers has 13 starters back and hung 49 on U of L in last year’s finale — in the first half.

Which leaves horrid Indiana State, feisty Arkansas State and those hated Wildcats from down the road. UK always struggles for respectability in the tough SEC, but almost skunked U of L last season at Papa John’s, winning 27-2.

One guy who hopes he’s wrong advises this: Take the under.

Keep up with the c d kaplan and the Cards this season at Score, LEO’s sports blog (score.leoweekly.com)