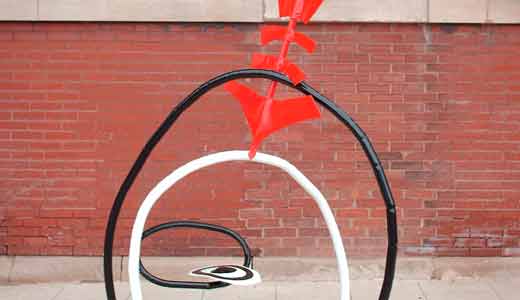 The underside of the Interstate 65 overpass on East Market Street is as plain and boring as buying in bulk: gray walls of paneled concrete stand perpendicular to standard sidewalks sprinkled with random urban detritus. There is almost nothing distinguishable about the place.

Then you notice what looks like a tear in taught fabric, from which swirls of wild color push to the surface. This is the last remnant of Louisville’s first and only public graffiti wall, painted over in the dull gray hue of industrial America. It was a failed experiment in which city government demonstrated it has a taste for art in the public realm — to a degree.

In the wake of the city’s decommissioning of the graffiti wall came a new compromise: Metro issued a bid to develop an overarching strategy for new and existing works of art along sidewalks, in parks and on street corners. Creative Time, a New York City-based firm, was awarded a $50,000 contract — some paid by the city, some by other entities — to come to Louisville, consult the locals and create a “master plan” for public art. City officials expect to present findings and recommendations this fall.

With details forthcoming, a city official shared some of the broader aspects of the plan. Most prominent is the creation of a funding stream for new works. Mary Lou Northern, Mayor Abramson’s senior advisor for parks, cultural affairs and faith initiatives, runs point on the public art initiative. While she won’t offer up the price tag, Northern says the new pot of money would most likely be filled by grants or other contributions; it is unlikely any money would come from the city’s coffers.

“It’s not going to create a whole lot of money up front, but over time we hope it will,” she says, adding that it would be at least two years before any coin is available.

A purse for public art is what most people in these circles wanted. That’s certainly true of Ken Herndon. The director of operations for the Louisville Downtown Management District, a nonprofit corporation that receives city funding to promote downtown beautification projects, started perhaps the most known and successful public art project around here.

Perhaps you’ve noticed a bicycle or two chained to Craig Kaviar’s massive bronze sculpture along West Main Street, which appears to be a skeleton mounted atop

twisty, vine-like tendrils. Or maybe you’ve seen a lock or two wrapped around David Bibelhouser’s stainless steel spiral, at one end of which is a cartoonish head that appears to be sleeping, with a contented smile striped across its face.

In 2001, LDMD was considering installing a batch of standard bike racks to meet an increasing demand in the city’s core. Metro was also rolling around such an idea. So instead of doubling efforts, Herndon came up with the idea to commission local artists to create functional pieces that would be art first and bike racks second. He’d gotten the idea from a pilot program in Mobile, Ala.

“I thought, ‘Well, let’s see if we could really kind of lose our minds a bit and give folks total freedom,’” he says.

The agency chose the first round of artists based on their portfolio work, offered them a location and then asked for pitches — something of an unusual approach that tends to offer an artist even more creative leeway. Despite the low-ish $2,000 commission (it has since risen to $2,500), artists seemed to be happy with the arrangement.

“As far as public art, thank goodness for Ken Herndon,” says Scott Scarboro, whose pastiche of old junk bikes was installed at Fourth and Broadway a couple months ago. “Although the bike rack project sounds somewhat safe and offered a little pay, artists were given a lot of freedom to create. A good opportunity.”

Once the project got its legs, artists began coming to LDMD. Bibelhauser’s swirling piece came in the third round of racks. “I saw it as an opportunity to have a piece in the public realm,” he says. “Prior to that I hadn’t had any.”

Thirty-two pieces comprise the bike rack project (three are actually benches), and Herndon says two more are scheduled for installation this year. About 30 cities have contacted Herndon about modeling the program, including Boston, Austin, Tex., and Portland, Ore.

There are about 150 works of art (individual perspective applies, of course) in Louisville, some 100 of which are owned outright by the city. We know this because another major component of the “master plan” is to catalog every piece that could be considered both “art” and “public,” a process that includes identifying the artist and noting the condition and full ownership of each. Some date back to the early 1900s; local or regional artists made most of them.

City officials are also considering best practices for obtaining and maintaining art, as well as where to put the new stuff: The a-ha idea is to line the Louisville Loop — a paved, 100-mile trail encircling the city — with new work, perhaps on bridges, signs or just for the heck of it.

But the biggest indicator of actual progress is that all of these elements exist and are becoming intertwined. There is an underlying philosophy, shared by everyone involved, that art in public, coming at no cost to the consumer, is a component of the mode of change — the turnover of big ideas, if you will — Louisville has endured and even thrived under for the past decade. Something that was once the province of dreamers and weirdos is becoming a driver, an economic indicator.

“Public art has a significant effect on Louisville’s ability to recruit people to visit and live here,” says Brett Jeffreys, part of the “Possibility City” campaign and friendoflou.com. “It is not always about wanting to participate in the art community or a desire to check out the variety of art exhibits or public art pieces; it is more about the feeling of being part of a city that embraces art.”