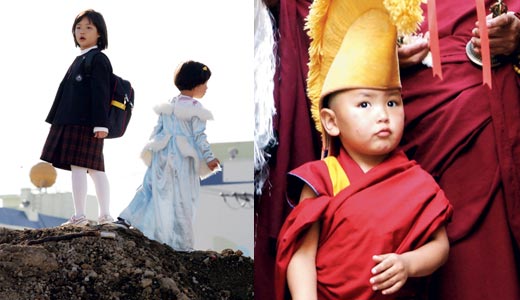 Two starkly different movies about children are closing out this year’s Asian Film Festival. Korean-American director So Yong Kim’s “Treeless Mountain” is a dark, symbolic film that follows two young girls, 6-year-old Jin and her 4-year-old sister Bin. The movie opens in bustling Seoul, where their troubled mother struggles to keep the family together. It’s a tough life, but because it’s the only life they’ve ever known, they assume it’s a happy one.

Before long, Mom caves, sending the children to live with their hard-drinking, neglectful aunt in the suburbs. This is not a suburb in the American sense; this is the desolate concrete world of Asia’s working poor. There are no playgrounds out here, and not being able to attend school, they find few friends. Strangely, it’s a blessing when their aunt dumps them on their grandmother, who lives still further from the city in the countryside.

Art-house movies about kids fall into two camps: the wistfully nostalgic and the oppressively dark. Kids, after all, have no power over their lives and only limited understanding, so the quality of their childhood rests upon the adults in their lives. And as we all know, adult life is pretty complicated.

The loving care provided by the children’s grandmother allows “Treeless Mountain” to start as one type of movie and end as another. There’s symbolism in their journey as they move from modern South Korea, filled with promises of prosperity and happiness that never materialize, to an idealized rural past. And while it is sometimes difficult to watch two kids languish in a confusing, neglectful world for two-thirds of the film, there’s payoff for anybody who is willing to delve into its environmental and political symbolism.

“Unmistaken Child,” by Israeli director Nati Baratz, is a documentary about Tenzin Zopa, a Tibetan monk entrusted with finding the reincarnation of his recently deceased master, Lama Konchog. While the fictional “Treeless Mountain” is frequently bleak and colorless, “Unmistaken Child” is surprisingly vibrant. Much of this is due to the otherworldly beauty of Tibet — its villages resting on plateaus and in misty valleys, and its flamboyantly decorated monasteries.

Zopa is an appealing subject, having spent his life from age 7 devoted to Lama Konchog and now burdened with locating his reincarnated soul somewhere in the rugged terrain and isolated villages of Tibet. And while it’s hard to be too critical of the peaceful and contemplative religion to which he’s devoted himself, any critically minded audience member will have some nagging questions: Is this male-dominated, extremely hierarchical religion as progressive as it is depicted in the West? And what about the poor child whisked away from his family to live the life of a Buddhist monk? What option was he given?

What’s so engrossing about “Unmistaken Child” is that even as these questions are asked — and thankfully in a subtle way — it doesn’t lose track of its aesthetic goals. It is, at the end of the day, a good story and a pretty film.

“Treeless Mountain” and “Unmistaken Child” will be screened Sept. 18-24 at the Village 8 Theatres as part of the Crane House’s 10th Annual Asian Film Fest. Visit www.cranehouse.org for more info.