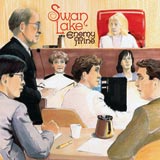 On paper, Swan Lake — the Canadian indie super-group featuring Destroyer (née Daniel Bejar), Spencer Krug (Wolf Parade, Sunset Rubdown) and Carey Mercer (Frog Eyes) — seems like a no-brainer. Krug often accompanied Mercer’s Frog Eyes before the rise of Wolf Parade, and Bejar tapped Frog Eyes for a Destroyer record not too long ago. They are Canadian, which means all three are probably pretty decent folk, eh? On record, Swan Lake are more miss than hit. Bejar, Krug and Mercer take turns at the microphone, with each one delivering a watered-down version of a Destroyer, Sunset Rubdown or Frog Eyes b-side, respectively. If this album sounded like Bejar, Krug and Mercer making something new, it would be incredible. But it sounds rehashed: beautifully executed but not invented. For a trio as brilliant as these guys are, that’s bad.