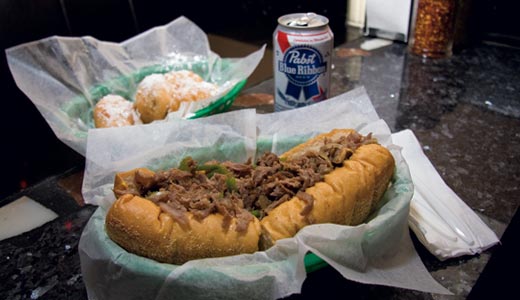 Philly cheesesteak and fried Oreos from Spinelli'sPhoto by Ron Jasin

A special kind of hunger descends when one has spent an evening quaffing pints with friends. This craving is sui generis, and it can actually be a lovely thing. The problem is it often prompts us to do silly things like scarfing four White Castles and a stack of onion rings at 2 a.m.

But the bustling Bardstown Road-Baxter Avenue strip stays alive until the wee hours, especially weekends. And it offers places better than corporate chains to satiate those after-five-drinks munchies. Just take a walk to clear your head and look around.

I set out recently to clear my own cobwebs and refresh my memory of some old standbys and new options, too, just in case I end up drunk and hungry in the Highlands anytime soon. I checked out three distinct sections: the Douglass Loop area, the stretch around Eastern Parkway and, of course, the Baxter Avenue club zone.

Twig and Leaf (2122 Bardstown Road, 451-8944) can be as packed as any Highlands bar at 3 a.m. I’ve seen it happen. If it’s late and you’re hungry, it’s almost the automatic stop in this section. Just think about the Twig: The brightly lit green and red sign out front beckons. So does the strip of windows revealing booths and famished (but recovering) diners.

On my last visit, I got a la carte biscuits and gravy ($3.45) and a gigantic soda, all for about $5. On the weekends, this place doesn’t close down at all. Score.

Heart of the Highlands

If evening’s end finds you near Eastern Parkway, your options are more varied. Qdoba, a Highlands mainstay at the corner of Bardstown and Eastern Parkway, now stays open overnight on weekends. Sure, it’s a chain, but a solid one. (Read: It beats the hell out of the Bell.)

You can choose from some interesting ethnic dishes, such as the vegan appetizer Pav Bhaji ($4.99), a West Indian snack food made with potatoes and chickpeas, with cilantro and chopped onions, served with bread. Or, go to the breakfast menu and hit up the breakfast tacos for just $3.99: two tacos packed with scrambled eggs, tomatoes, peppers and chili beans. Now that’s a late-night bite.

I stopped in recently with my friend Julie, and we tried Pappadums, which are paper-thin blossoms of crispy East Indian bread stuffed with a spicy onion chutney ($1.99). It’s a light snack to be sure, but packs a lot of flavor and proves to be a nice surprise.

Head the other way from Eastern Parkway and you’ll find another classic late-night stop: La Bamba (1237 Bardstown Road, 451-1418). Famous for “burritos as big as your head,” this place has made its living catering to the wobbly Bardstown Road crowd.

I hadn’t been there in several years when I stopped in recently with my buddy Greg. I got a chicken taco and a chorizo taco with a whole jalapeño as a side, and a Pepsi ($5.50 total); he got a “mini-burrito” with shredded pork and a soda (a $5.90 tab). Naturally, his burrito was nearly the size of his forearm.

“This is an awfully big mini-burrito,” he deadpanned.

The fillings were fresh, and the tacos were packed in double flour shells with Chihuahua cheese melted in between. Quite interesting. Sure, you could make your way down to the Wendy’s late-night drive-thru from there … but why?

The pubs down on Baxter Avenue stop serving food pretty early, so what’s a drunk and hungry guy to do?

If you give out early (before midnight), I recommend Falafel House (1001 Bardstown Road, 454-4407). It offers solid Mediterranean fare including gyros that remind me of my beloved Hot and Tasty back in Liverpool. The gyros at Falafel House was packed with sliced lamb and beef, and piled high with lettuce, onions and the classic, delicious cucumber-and-yogurt tzatziki sauce. It’s $4.99 by itself or $7.99 with fries and a Greek salad.

Into the wee hours? You can always stumble over to Derby City Dogs (960 Baxter, 561-2880), which is, happily, open until 4 a.m. weekends. It’s kind of a brick-and-mortar hot dog stand that also has nachos, stuffed pretzels and sweet treats such as shakes and smoothies, all at reasonable prices.

A chili-cheese dog at the princely sum of $2.50 blew me away. The sheer mass of it was the first thing I noticed, followed by the quality of the all-beef sausage and then the way the chili and finely shredded cheddar complement the beef. Oh, and added spicy mustard makes it extra messy and, um, spicy. It’s as close as you’ll get to feeling like you’re in New York or Chicago. (Oh, and did you know the place has inside seating during day and evening hours? I sure didn’t.)

But perhaps the ultimate late-night stop is Spinelli’s Pizzeria (614 Baxter, 568-5665, www.spinellispizza.com). My son had raved about the Philly cheesesteak sandwich. I gave it a try and was handsomely rewarded with a gigantic bread roll stuffed with tender, thin-sliced steak, mushrooms, onions and provolone cheese (white American and Cheez Whiz are also available). I added hot sauce, and by the time I was nearly finished, the bread was getting soggy from the juices. Absolutely delicious and just $7.25. A much better bargain than a late-night Big Mac meal, don’t you think?

Greg got the standard slice of pepperoni pizza for $3, and it was a meal in itself — an enormous slice of thin, New York-style pie. OK, it’s Philly-style, but the rest of the country can’t tell the difference.

Perhaps stupidly, we topped off our repast with an order of deep-fried Oreos (four cookies for $3.25). This may be the ultimate drunken snack: The jolt of sugar alone will rock you out of your haze.

Greg kept calling them “insulin cookies,” because he swears if you eat more than two you’ll get diabetes.

What did I learn? Well, first of all, keep a lot of Alka-Seltzer on hand. I also learned it’s probably best that I don’t stay out as late as I used to when I was younger.

But the good news is that this stuff tastes good when you’re sober, too.

The Taste of Louisville

The taste of Louisville, happily, has nothing to do with racehorses or the muddy Ohio. Or, for that matter, those awful Derby Festival blazers. This taste is, well, tasty: The Louisville Chapter of the Kentucky Restaurant Association will host the 36th annual Taste of Louisville Tuesday from 6-9 p.m. at The Crowne Plaza near the airport. More than 50 local restaurants and distributors will offer free samples of food and drink.

The event honors the late Al J. Schneider and Paul Luersen of The Galt House. Proceeds will benefit Metro United Way and the restaurant association’s ServSafe Program. Tickets are $55 per person. Click www.thetasteoflouisville.com or call 499-6478.