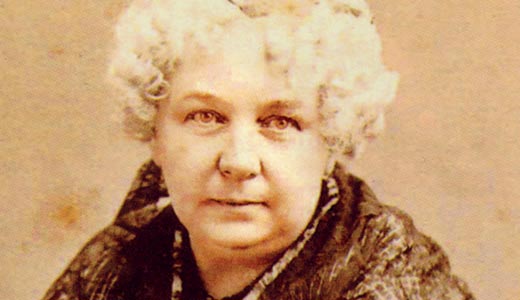 History is a funny thing. We tend to think of it as solid and unchanging, full of facts like “Columbus discovered America in 1492.” But it really is fluid, usually written by people who have hindsight. Most histories are products of their time as much as the events they describe.

Elizabeth Cady Stanton (1815-1902) was vilified in her lifetime. Today she is largely revered. Both are the result of her place in history as an early champion of women’s rights, especially the right of
women to vote. To give you an idea what Stanton was up against, a woman of her day couldn’t own property and had no rights to her children — her husband did.

“All men and women are created equal,” Stanton exclaimed. Fighting words. She drove this point home through public speaking, at a time when the female sphere was essentially home life. She later estimated she had written more than 100 speeches and was widely published in books and periodicals.

Movements can have birthplaces, whether the ideas actually originated at that location or not. For the women’s rights movement, the birthplace was Seneca Falls, N.Y. That is where a group of like-minded women and men gathered July 19-20, 1848, at what is now known as the Seneca Falls Convention. It was there Stanton wrote and presented the “Declaration of Sentiments,” modeled on the “Declaration of Independence” with wording underscoring the rights of women.

Author Lori D. Ginzberg acknowledges that Stanton is a difficult subject. “Stanton and I go way back, for I have been arguing with the woman about one thing or another for my entire adult life,” she writes. “I do not identify with her or revere her or hate her. We have argued about the meaning and usefulness of voting; whether and how deeply she was racist, anti-Semitic, intolerant or self-absorbed; how she could talk as if all women were wives and mothers when her best friend (Susan B. Anthony) was neither; and whether to support Abraham Lincoln for re-election in 1864.”

As a result, the biography does not sugarcoat. Most great leaders are complex, full of conflicting ideas and mannerisms. Stanton is certainly no exception, and she is presented with thoroughly human appetites for rhetoric, food and naps.

There is a Louisville connection. Marsha Weinstein, former Kentucky Commissioner for Women and League of Women Voters’ past president, formed the non-profit Elizabeth Cady Stanton Trust with Stanton’s great-great granddaughter. The trust owns a large assortment of suffrage memorabilia, with plans to unveil a website in November.