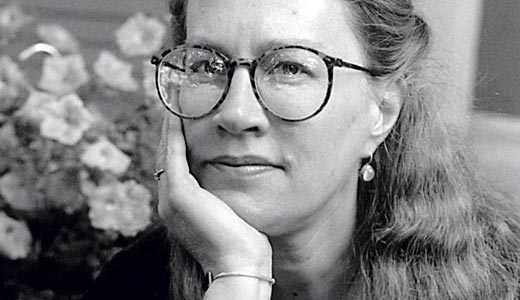 It has been 15 years since Sarah Gorham and her husband, Jeffrey Skinner, started Sarabande Books, and it is amazing to think that most people in Louisville still haven’t heard of their esteemed publishing house. Among writers, it is a nationally renowned staple that receives nearly 4,000 book-length submissions every year from both aspiring and established authors eager to see their work published under the Sarabande seal.

Gorham, editor-in-chief of Sarabande and a wonderful poet and essayist in her own right, decided early on that the classroom wasn’t meant for her. She needed a more hands-on venture on which to pour her talents and energy. The world of nonprofit publishing seemed the most logical step. A fickle and fierce industry to say the least, Gorham invested the time in studying other independent publishing houses to find out what worked and what didn’t. What she discovered was that most of the other houses excelled at one aspect of the business — like book design and layout — but lagged in marketing, leaving them a lot of pretty books that nobody knew to buy. Gorham realized she needed a business model that was not only fully formed and aptly staffed, but imaginative enough on all fronts to adapt to the vagaries of the market.

The result, of course, is Sarabande Books, which publishes 10 new books each year, averaging somewhere between 2,000 and 7,000 copies per title. They run a trio of sought-after contests: The Linda Bruckheimer Series in Kentucky Literature awards one Kentucky author annually with the publication of their work. Past winners include the incomparable Jan Carew and the novelist Karen Salyer McElmurray. This year’s winner, Brett Eugene Ralph, will be reading at Saturday’s anniversary event (see inset) along with poet Kiki Petrosino. On the national level, Sarabande hosts the Kathryn A. Morton Prize in Poetry and the Mary McCarthy Prize in Short Fiction, both of which offer publication of the winning manuscript and a hefty cash prize. Sarabande even sponsors the Flo Gault Poetry Competition, which is open to any full-time Kentucky undergraduate student.

Sarabande tends to focus on genres otherwise marginalized by the mainstream publishing industry, like poetry, short fiction and creative nonfiction, leaving them a pretty healthy niche in which to pick and choose without overwhelming competition. As well, the imprint offers a staff of editors, interns and designers to bolster and assist each writer through the gauntlet of publication.

“At most independent publishing houses, the writers pretty much have to come with their manuscripts ready to go,” says Caroline Casey, Sarabande’s new marketing and development director.

A self-proclaimed “author-oriented publishing house,” Gorham says they want to create books their authors will be proud of. As other independent publishers throw up their hands to the onslaught of digital publishing and the menace of online copyright infringement, Sarabande has taken the next step by creating books that are unique art objects on their own, rendering each title both beautiful and impossible to duplicate online.

“We are also committed to keeping all our books in print,” Gorham says. “Only one of our titles has gone out of print (Kate Walbert’s ‘Where She Went’), but that’s because it was picked up by Penguin, so there’s certainly no concern there.”

Over the past 10 years, the publishing world has seen nearly all the mid-market literary houses absorbed by a handful of large-scale commercial conglomerates. Casey says this has been beneficial for Sarabande, because now places like Knopf won’t bother with a literary project they don’t see selling more than 20,000 copies. The practical effect is that besides getting all the hot new talent, Sarabande is beginning to land even more prestigious trickledown projects: Charles Wright’s “Outtakes” and the much-heralded “I’ll Tell What I Saw,” a collaboration between the late, great artist Michael Mazur and Robert Pinsky, the former U.S. poet laureate. If you’re unfamiliar with Mazur, check this: In the early ’80s, he once suggested on the editorial pages of The New York Times that the government should commission artists to decorate the cones of all our nuclear warheads. That way their destructive payload would end up behind museum glass, never capable of being deployed.

Sarabande, for Gorham, is more than just the name of the 17th century dance by which she christened her publishing house — it’s the foundation of her whole aesthetic.

Inspired by an Aztec mating ritual witnessed by Spanish explorers, the dance acquired its gracious and baroque outer shell in the courts of Europe. The two forms combine to create, as Gorham describes, “a graceful and eloquent surface, but with a wild and evocative body root.” Surveying any of Sarabande’s 142 titles, you’ll discover just that. Not only does the work appeal to the intellect, it pulls at the body, keeping the reader’s senses anchored viscerally to the page.

And the books are beautiful, no doubt about that. Just glimpse the cover and layout of any one of their many titles and the quality attests for itself. From the embossed Sarabande logo on the first and final page, to the consistently top-notch cover art, Sarabande boasts a craftsmanship few other nonprofit publishers can rival. Instead of two bookends with words crammed between them, Sarabande generates book formats that actually reinforce and enrich the reader’s experience. They sometimes go so far as to mix up the line spacing and fonts between sections, like in Jenny Boully’s new book of essays, “The Book of Beginnings and Endings.” Aside from introducing America to a completely new way of writing (Boully’s book matches the various beginnings of essays with the endings of others, with no middle to connect them), the layout teases and manipulates the textual experience, attuning readers to things they are normally not aware of while flipping chapters.

Sarabande is pushing aesthetic even further with the upcoming Wright and Pinsky projects.

“We like to pair somebody old with somebody new,” Gorham says as she shows me the groundwork for Wright’s new book of sestets (six-line poems), “Outtakes.” Besides alterations to the traditional book shape, the project matches the stellar art of Eric Appleby — of the Louisville-based Lumberyard Magazine — with Wright’s poems, which will appear directly as they did from the poet’s typewriter. The book will even include minor editing ink strokes that accumulated during correspondence between editor and author. The result is all at once, raw and intimate and eloquent — true to the Sarabande model.

“I’ll Tell What I Saw,” arguably Sarabande’s most ambitious project yet, culminates from the extended collaboration between Robert Pinsky and Michael Mazur. Selections from Pinsky’s translation of “The Divine Comedy” serve as the basis for Mazur’s illustrations, which maintain Dante and Virgil’s points of view. Nowhere do either the Italian poet or his muse/guide appear in the art — rendering, as Caroline Casey astutely points out, “the images themselves an act of translation.” By employing unique color schemes and various printmaking effects, Mazur’s depictions act as dazzling portholes into the alien and haunting landscapes of Dante’s celestial kingdom. “I’ll Tell What I Saw” is slated for release in November.

Perhaps the most impressive innovation Sarabande brings is its online educational features. If a school or university picks up a Sarabande author for study in the classroom, the teachers and professors can direct their students to online reader’s guides created by the authors themselves. Also, the Sarabande site offers enhanced linking to book reviews and author interviews, and real-time chats. Now, instead of mere speculation, students can engage authors one-to-one and get immediate feedback from the source. There’s even a post for a crash course in “Indie Publishing 101.”

As the commercial verve of corporate publishing has monolithically eclipsed most other concerns over the past decade, more and more aspiring talents are discovering that the doors of New York and L.A. are closed to their work. Just two decades ago it was impossible to even conceive of breaking through as a writer without negotiating these centers of the publishing universe. Thanks to 15 years of dedication from the diligent imaginations at Sarabande, that is no longer the case.

The future of American literature has a stop in Louisville.

To learn more about Sarabande or to become part of the Sarabande Circle, visit www.sarabandebooks.org.

The Sarabande 15th Anniversary Festival well be held on Saturday, Sept. 26, from 6-9 p.m. at The Green Building (732 E. Market St.). The event will feature poets Kiki Petrosino and Brett Eugene Ralph, as well music by DJ Kim Sorise. Suggested donation is $75 single, $100 couple, with tickets either in advance or at the door. For more info, contact
[email protected].