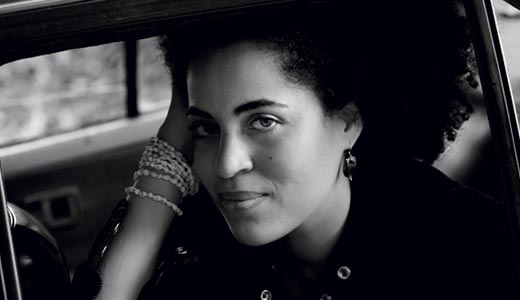 To give LEO readers an idea of the quality talent Sarabande puts out, I decided to profile the work of an up-and-coming poet named Kiki Petrosino. Her debut book of poems, “Fort Red Border,” was released in August.

Sarah Gorham — who often returns to her alma mater to field new talent — picked up Petrosino out of the renowned Iowa Writers’ Workshop. The book’s title supplies the anagram for one of the book’s core personalities: Robert Redford. Some may consider the Hollywood icon a bizarre fixation for a “real” artist, but as you read on you realize this fixation both highlights and comforts a hushed but tangible solitude.

We may not like to admit it, but we do daydream about the icons of popular culture. For all I know Zooey Deschanel may be an anabolic mutant misanthrope, but that doesn’t keep me from conjuring her daffy smile to soothe me through rush-hour traffic. And that’s exactly what Petrosino’s poems do; they explore the hold such bright-light figures have, not so much on our hearts and daily lives, but our imaginations.

“I was actually surprised myself to see him enter my poems,” Petrosino confesses. “Around the time when I was writing those poems, I was really lonely. I was in graduate school in Iowa City, I didn’t really know anybody … isolated. I didn’t even have TV. But I did have a DVD player (on a laptop) and a public library card, so I started checking out movies. A couple Robert Redford movies got in there and then he appeared.”

It’s important to note that her poetry summons nothing of Robert Redford’s actual life. Petrosino didn’t scavenge IMDB for tidbits and bio on the famous actor. The Redford of “Fort Red Border” hatches directly from her head. Again, it may seem curious that she, who is half Italian, half African-American, would find solace for her solitude in the prototypical WASP leading man. Redford’s inability to fully access her African-American side becomes one of the more electrifying dynamics of their relationship. Redford finds himself curious, at least superficially, about certain things — the “natural” style of her hair, for instance — but at the same time she’s not entirely comfortable relating everything to him for fear of rejection. She is at once exalted by his attention and terrified of falling through the ice.

Racial themes play out through an intense constellation of white and brown objects: the snowy slopes of Crans-Montana, “A watery rope of moonlight (that) tumbles over his forehead and teeth,” the brown neon of Las Vegas seen from an airplane, sips of hazelnut coffee. But perhaps the most startling images combine and crystallize the two elements — such as Redford’s gift in “Mustang Bagel,” a signet-shaped chocolate surrounded in smoked salt from Wales.

Iowa City eventually worked out for Petrosino. After completing her MFA, she finished “Fort Red Border” with the addition of two Redford-less sections. The first is “Otolaryngology,” which — for the most part — hones its verses on specific phonetic qualities of spoken English. This section probes speech to see how sound both adheres to and manipulates meaning. The result homogenizes into something like verbal jazz stoked associative, free-forming images. The final and more formal third section, “Valentine,” involves various charmed and insightful meditations on the nature of intimacy and its association with food — two things invariably linked in Petrosino’s imagination.

Petrosino works for the International Writing Program, a unit within the University of Iowa.

“It’s a unique residency program for writers who are not from the U.S. Every year we invite 25-35 emerging or mid-career writers from all over the world to come to Iowa City. They write and they give lectures, and learn about the American literary scene. Basically, it’s my job to write grants and secure visas for these talents and help them negotiate their many engagements they have over here.”

In compliance with the Sarabande aesthetic, “Fort Red Border” offers a robust reading experience that thrives with humor, sensuality, longing, insight and disappointment, often all within the span of a single page. Subtle threads of nuance travel through one poem to the next: the body heat still licking the sheets though the lover just departed the bed, an indention in a seat cushion that gradually returns to form, a breath that evaporates off a windowpane; as when a dreamer awakes impressed with certain details without knowing from where or why, so too do the readers of “Fort Red Border” find themselves remembering certain phrases and images, though they may not initially comprehend how they fit into the work as a whole.

This is perhaps Petrosino’s greatest artifice. She impregnates our imaginations with certain indelible details that we cannot dislodge until we relive the poems from which they sprung. The nature of her writing compels us to dream each dream again, so that we may remember and sort them out.