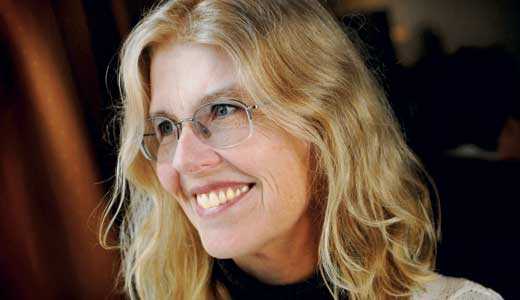 I read the novella “The Age of Grief” more than 10 years ago, before it became the movie “The Secret Lives of Dentists.” I’ve owned six copies since then; none of the people to whom I’ve lent a copy has returned it.

Jane Smiley won the Pulitzer Prize in 1992 for her novel “A Thousand Acres.” She has published more than 12 novels and several works of nonfiction. Smiley is able to convey the depth and complexity of human relationships, from familial to romantic, and is not a champion for a happy ending. She understands the human experience, with all its difficulties.

I was eager to read how she would approach a young-adult novel. Not only is “The Georges and the Jewels” — released Sept. 9 — her first foray into the genre, she writes about one of her greatest loves: horses.

LEO: What was the reaction to your idea to do a young-adult novel?

Jane Smiley: Every so often maybe somebody asks me why, but most of the people who I have told the story to are horse people, and their reaction is, “Well, really, what took you so long?”

LEO: There are lovely illustrations at the beginning of each chapter. Were those your idea?

JS: We knew there would be illustrations … they looked for an illustrator who would sort of subtly indicate what certain things might have looked like. Since the book takes place in the ’60s … I was rummaging around the shelves in my house, and it turned out I had a book called “The Sports Illustrated Guide to Horseback Riding,” published in 1963 or 1964. It had been given to me by my best friend in junior high. It had illustrations by a man who was very important to all the horse girls back in those days named Sam Savitt. His illustrations were quite up to date for the mid-’60s.

We knew that there were going to be girls that were interested in horses but didn’t know too much about them, so there had to be things that showed what Abby (the protagonist) was doing so that people could imagine her life.

LEO: I was impressed by how you were able to hold back sentimentality, particularly with the stereotypes we tend to give horses. I am always attracted to ways people write about human-animal encounters successfully. The scene in which a horse dies is very emotional.

JS: I cried when the horse died. And you would cry if you suddenly ran out there and discovered that the mare has colicked.

Most of my friends are horse people, and one of my best friends is a trainer at the Santa Anita racetrack. We were talking about horse books we remember from when we were girls, and the moment anybody remembers in any series is the moment when one of the horses dies. It’s so devastating.

LEO: In “13 Ways of Looking at the Novel,” you wrote that you are very much partial to your book “Horse Heaven,” that it was fun for you to write. I am wondering how much fun you had writing “The Georges and the Jewels” and how much of you is in Abby.

JS: I had a wonderful time writing it. But I have to say that very little of me is in Abby because Abby lives a much more organized and difficult life than I lived. I lived an idle life and I read a lot of books … I was interested in horses, but I was very lost in space. I think Abby is a girl I would have wanted to know, but she has it much more together than I did.

She’s not even someone that I would have thought I could be then, but she is certainly someone I would have wished to be friends with.

JS: There are at least two books following “The Georges and the Jewels.” And I have an adult novel coming out in May titled “Private Life.” It’s about a woman in the 20th century who is married to a mad scientist.

LEO: I don’t know where you come up with this stuff.

JS: The marriage is based on the idea of one of my great aunts who was married to a mad scientist. And even though I never met either one of them and didn’t know them, she is quite a character in our family. And he was world-renowned and in many ways a reviled character. He was an astronomer. So is the scientist in the book.

I have also been working on a book for a science series about the invention of the computer — not software but the hardware. The guys who set about inventing the computer in the 1930s and 40s were a real set of characters, and they had lives. So I am working on that too. I have a lot of irons in the fire, so to say.