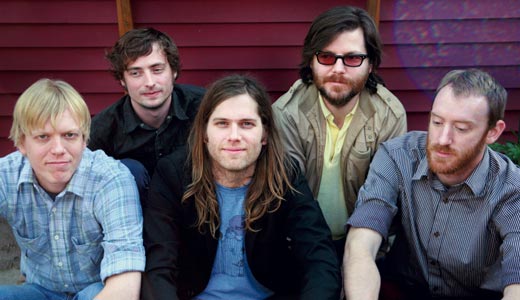 On the website MimandHoney.com, Fruit Bats singer and Shins guitarist Eric Johnson details an oddly pleasant dream he had full of the kind of surreal journey you might find in Jack Kerouac’s novel “Book of Dreams.” Johnson talks baseball, Seattle and BBC narrator David Attenborough.

LEO: What does “in charge” mean in a band versus, say, a foreman at a construction site? And does that person stay in charge for very long?

Eric Johnson: I don’t know if I know what that means or if I ever knew, but sort of my vision for Fruit Bats was that it was a collective. Because I was the one who put it together, it became my thing by default right out of the gate. I feel like having that happen right away, I was playing catch-up the whole time, and playing incidental bandleader. This (album) was definitely an attempt at handing over the reins.

LEO: You have a link on the band’s blog to YouTube footage of David Attenborough. Do you prefer his narration of “Planet Earth” or Sigourney Weaver’s?

LEO: Also, you have one on Nicaraguan baseball. What’s that about?

EJ: I went to Nicaragua a few years ago on vacation. I like the country, and I like baseball, but I decided against putting my energy into Major League Baseball. I went to a game in Japan, but the team name was really hard to read. Their baseball leagues are so shaky there, they only have a season once every couple of years.

LEO: Did you play baseball as a kid?

EJ: I did. I was a terrible little league player, but I’m still a huge fan. I’m a pretty die-hard Chicago Cubs fan. I try to catch the Bears …

LEO: No Mariners for you?

EJ: No. I’m a Chicago person. I went to Mariners games, but it just wasn’t as fun.

LEO: When did you start recording your dreams for the website MimandHoney.com?

EJ: Recently. The (most recent) dream was from five or six years ago. You don’t forget a dream like it. It was so vivid and weird, I wrote it down immediately.

Fruit Bats join Iran and Kevin Barker Friday at Zanzabar (2100 S. Preston St., 635-ZBAR). Tickets are $10 (adv.), $12 (door). Iran is Kyp Malone (TV on the Radio) and Aaron Aites, who was in town this past June screening “Until The Light Takes Us,” which he co-directed, at the Flyover Film Festival. Barker collaborates with harpist Joanna Newsom.

Over the last 10 years, Indianapolis’s music scene has gone and continues to undergo a massive transformation into a hub for independent rock, due largely to labels like Joyful Noise Recordings and bands such as Marmoset.

“It’s a lot better than when we started,” Marmoset’s Jorma Whitaker says. “I’ve said this before, but when we started, there wasn’t much, sadly. It was really hell here. There’s a lot more younger bands that just pop up all the time that are actually worthwhile.”

Since 1995, Marmoset can lay as much claim to inspiring the current crop of no-fi imitators as their contemporaries in Sebadoh, and one need look no further than their August release, Tea Tornado, and the companion live EP Lemon Meringue.

Culled from the same sessions as their previous Florist Fired, Marmoset opt for a straightforward approach, with Whitaker’s vocals — equal parts Edith Bunker and the Beatles — batting lead-off. Meringue is a collection of six songs recorded Jan. 30, the anniversary of the Beatles’ last show at 1 Savile Row.

Close out your weekend dancing with Akron/Family, whose Dead Oceans release Set ’Em Wild, Set ’Em Free struts and sways nicely along with undulating beats. Erstwhile comic-book artist Jeffrey Smith and Slaraffenland open it up. Slaraffenland is on the label Home Tapes, an experimental house responsible for past releases by Shedding. This goes down Sunday, Sept. 20, at 21c Museum Atrium Gallery. Doors at 8 p.m. Cost is $12 (adv.), $15 (door).