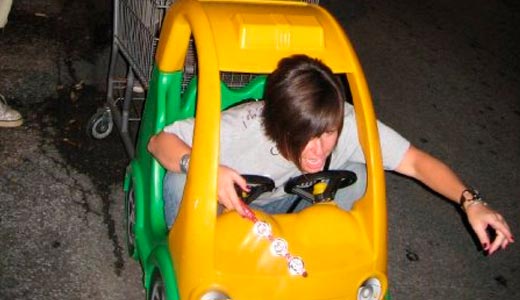 As far as I can tell, the sixth annual Gettin’ Drunky in Kentucky pub-crawl, held Sept. 12, was a success. Did I spend a shitload of money? Yep. Did I feel like crap for two days after? You betcha. Do I even remember what happened at the last few bars? Hell no. But I have proof that I completed the challenge (read: bruises, bar tabs and embarrassing Facebook tags), and that’s all I need to know.

This was our largest group ever — the Outlook Inn couldn’t even contain our initial group. Sure, we lost some brave soldiers along the way (damn Akiko’s), but we also gained some chivalrous strangers. As we neared the end and stumbled into Bearno’s Highlands, many curious onlookers thought it was the second coming of the Zombie Walk. One bystander thought we were re-enacting the “Thriller” video. Our clothing was tattered, our speech slurred … we limped and swayed, we tumbled over LEO and Velocity boxes alike, we hijacked shopping carts and made out in corners. The Baxter/Bardstown corridor was ours for the night — we were landlocked pirates searching for a bubbly treasure. We found it, all right. Now, can someone explain to me why I can’t sit down and where this guinea pig came from?

I chastised you for years, and you just sat there and took it. I laughed, pointed fingers, shoved you in a locker. Vodka drinkers — you crazy-ass bitches. Who knew you had a secret to hide? I thought you drank the shit because it didn’t have taste or calories. I never understood it. But the other night I was coaxed into a vodka tasting, and when that bizarre buzz hit like a Mr. Misty brain freeze, I saw the err of my ways. The party was a launch of Three Olives’ new bubblegum-flavored vodka, and I was as skeptical as Oprah interviewing Whitney. This bubble gum crack is whack, I thought. What adult wants a drink to taste like a wad of Big League Chew?

Three bubblegum martinis later and I was on top of the bar singing about sobriety and comebacks — well, not really, but you know what I’m sayin’. I barely remember doing anything other than swallowing (insert headline here), and — boom! — I had a pleasant and warming buzz. Wink, wink, vodka drinkers. I totally gotcha now. I stand corrected. You coulda clued me in sooner.

Saturday is the 19th annual Schnitzelburg Walk in Germantown — the perfect way to drink, eat, dance and play your way through one of our most eclectic neighborhoods. More of a street fest than a pub-crawl, the Schnitzelburg is an excuse to dust off your favorite coozy and join the masses in the blocked-off streets for some good old-fashioned citizen bonding. There will be live music, outdoor beverage consumption and certainly a suckle of a brat or two. The party goes from 6-11 p.m. at most of the bars throughout the ’hood, including Check’s, Zeppelin Café and Flabby’s. Please pick me up if I fall down.

No, I’m not talking about New Orleans or my college town of Athens, Ohio. I’m simply making you aware of the esteemed arts in this city by pointing out a production coming soon by the Necessary Theatre.

“The Drunken City,” which runs Oct. 1-3 and 8-10 at the Kentucky Center, is about three girls who go out on the town for a bachelorette party, get drunk, encounter tap-dancing dentists and bankers, and … let’s just say some vows never get taken. I also hear that drunken interpretive dancing is involved. Sounds like just another night at Connection to me, but I’m intrigued. Tickets are $15. Call 584-7777 for more info.

• “Ur mom wishes she had jesses girl”

• “Can I do japanese karaoke?”

• “We need more giblets on this walk”

• “Guess wht i jst found in the urinal”

Snd ur drnk txts 2 [email protected]. Check out my daily reasons to drink at barbelle.leoweekly.com