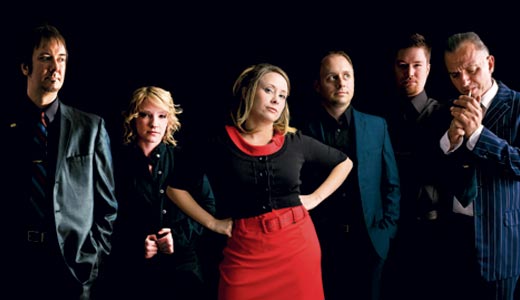 The Dixie Bee Liners stop in for the 2009 Bluegrass Festival at the Water Tower.

Buster’s
Jessica and Clark Case are two Lexington attorneys who double as historical preservationists. And that mentality doesn’t stop at the barroom door. When they heard Buster’s in Lexington was being razed along with its next-door neighbor, The Dame, and that the Buster’s owner wanted to get out of the business entirely, they put in an offer. The new Buster’s Billiards & Backroom has been relocated to the former Old Tarr Distillery (Bonnie “Prince” Billy played there last year) on Manchester Street in Lexo. But they wanted a different type of audience attending Lexington’s live shows; namely, those not old enough to drink.

“Not allowing those between 18 and 21 to be a part of live music keeps an audience from being developed,” Clark Case says. The downtown bar has a 1,000 capacity bar, pool room and rock room.

Although the two are now well-acquainted with the ’round-the-clock babysitting that comes with owning a new business, their opening night looks to be a barnburner: These United States, whose new album, Everything Touches Everything, came out Tuesday (they play here Oct. 9 with Jessica Lea Mayfield at Skull Alley), with Chico Fellini and Wax Fang kicking things off Friday, Sept. 4. Silversun Pickups, Derek Trucks and many more are also booked. Check www.bustersbb.com.

Music Cast
Zak Riles (Grails) joins us to talk about this weekend’s upcoming show with Little Wings at the Swan Dive. Listen at Bluegrass Catastrophe, bluecat.leoweekly.com.