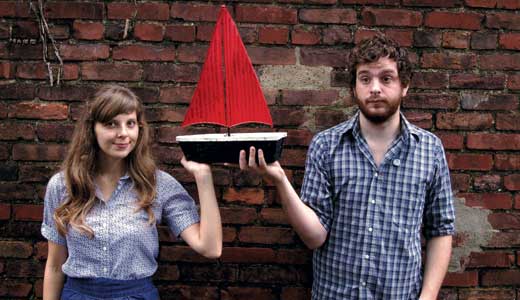 During the golden age of mix tapes in the ’80s, when they freely roamed the Earth uncontested, it was hard to imagine a time when they wouldn’t exist in plentitude. Yet, somehow, despite the fact that they once existed in abundance, in the last decade they’ve practically gone the way of the dodo.

But thanks to the pioneering conservation efforts of The Kinship Gallery, there may be hope that this obsolete species of technology can be brought back from the brink of extinction. On Friday, Kinship is hosting a “Mix Tape Art Show,” featuring 12 artists’ homemade mix tapes, with liner notes and artwork inspired by the music. For the cost of a cup of diner coffee ($1), you can adopt a mix tape and participate in the movement to insure its precarious survival in the new millennium.

“We’ve been wanting to do an art show about music since the old Butcher Block Gallery days,” says Hillary Harrison, Kinship Gallery co-founder. Harrison, the creative force behind the now-defunct yet fondly remembered Butcher Block and the stylish Southern culture zine Bejeezus, opened The Kinship Gallery in May with local artist Dan Davis (aka Skeleton Royal).

“We felt there was something missing in terms of contemporary art venues in Louisville,” Davis explains. “We wanted a casual, playful atmosphere for local artists to display their work in, and for emerging national artists to exhibit in Louisville.”

Davis had such a hard time finding a venue for his work a couple years back that he resorted to turning the living room of his Frankfort Avenue apartment into a gallery. The Kinship, located in the back of the WHY Louisville store, is a micro venue about the size of a dorm room. There is something undeniably fresh and innately sincere about a gallery of this scale. With a non-existent intimidation factor, a youthful atmosphere of experimentation and exuberance reign; in it, art seems as affordable and attainable as candy.

Although it has been open less than a handful of months, its energetically focused and unapologetic curators have already launched two shows, featuring the works of such local notables as Kathleen Lolley and Patrick Jilbert. In filling the gap between haphazard coffeeshop amateur display and the more high-end displays of professional work in commercial galleries, the Kinship’s recent arrival on the Louisville scene is a move toward biodiversity within our city’s art ecosystem and a physical manifestation of DIY art promotion ethic in the Facebook generation.

The “Mix Tape Art Show” is shaping up to be an exciting next chapter in The Kinship’s voyage. Natalie Sud, Nathaniel Russell, Brent Woosley, Thea Lura and Nathan Salsburg are just some of the artists contributing mixes as diversely themed as “Halloween” and “Kentucky.” “Each artist involved in the show is, in a way, curating their own show with their cassette,” Harrison says. “They are presenting a tiny show to the listener and viewer in the form of a cassette tape. Every aspect of the cassette is equally important — from the songs selected, to the order of the songs, to the liner notes. The music and artwork together help convey whatever message the mix maker is trying get across.”