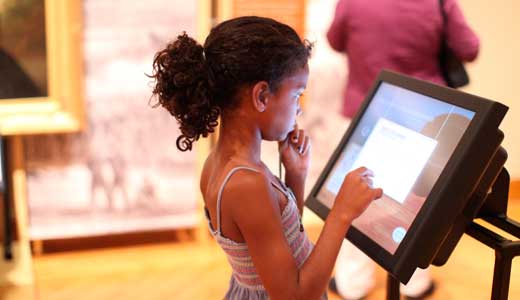 The Speed is undergoing a transformation from the inside out. And that’s the point: The museum is seeking to reach further into the community in an effort to bring more of the community — whomever that may end up being — to it.

Charles Venable, the Speed’s director, is the catalyst. His ideas reach into every corner of the museum.

“The mission statement of the Speed is to discover, together with its communities, the joy and power of great art. Everything we are now doing at the museum supports this primary mission,” Venable says.

“The expansion and renovation project we are developing, for example, is totally geared to enhancing the Speed’s ability to engage the public. Our upcoming Community Forum (on Oct. 22) takes a slightly different path to get to the same place. Besides introducing or reintroducing the Speed to a very diverse and broad segment of Louisville community leaders, we really want to hear what they would like their museum to do for their constituents. How can we use (our) resources in ways that benefit as many people as possible?”

Victoria Hamilton, an intern at the Speed, is putting together the forum. “We are thinking of it as a community center, in being the people’s Speed,” she says. “We want to make it more open to the community, to raise their comfort level. The resources here are so vast, why not share them with the community?”

“(Venable) has a real interest in reaching out, to engage the community,” says Cynthia Moreno, curator of education. Her department is fundamental in spreading the concept of museum as community resource.

“The real idea is to get people here, to get conversations, what they would really like to do and see at the museum,” she says. “What will success look like? To develop relationships … something we can build on. Let people choose how they’re involved. Have the museum look like Louisville.”

One of the museum’s success stories is the Asian Cultural Festival, now in its 15th year. The program, in partnership with the Crane House, brought more than a thousand people there in May.

African-Americans are another minority group involved with the Speed over the years. The museum hosted the Lincoln Family Day on June 28, in association with its Abraham Lincoln exhibitions.

The museum wants to reach groups that are not strongly represented, like gays, Muslims and senior citizens. The Speed’s revamped diversity committee is living up to its name. The museum is working with Americana and Arcadia community centers, for example, which have large Muslim populations, and the Kentuckiana Rainbow Chamber of Commerce to reach the gay, lesbian, bisexual and transgender communities. “Seniors, we talked about them extensively. It’s phone call by phone call,” Moreno says.

Other museum departments are also on board. Suzanne Weaver, curator of contemporary art (see sidebar), wants “artists to meet the museum staff, to start dialogues with the museum,” she says. “I want artists to create shows, events, tours of exhibitions.”

To that end, Weaver has created the Artist Dialogue series, with local artists on the panel, to be held four times a year. The first one is on Sept. 17.

Weaver is thrilled that local artists are also taking part in the new Art After Dark program, which replaces AfterHours. There will be multiple events during evenings. The premiere event will be on Oct. 23, with plans for three a year.

“Art After Dark offers an experience for the community to interact with the museum on a level unlike ever before,” says Mindy Johnson, director of the visitor experience. “Whether you like music or film or theater, there will be something at the museum to entice you, and it will all make a connection back to art. Local members of the community will be leading tours of the collection to give a fresh new perspective of the art. Instead of an art historian, visitors will be able to experience art through the eyes of a musician, chef or orthodontist. I would love for everyone to … feel connected to their art museum in ways they might not have when they arrived.”

“Getting regular people to understand that art and artists enhance their lives no matter how much they know about art will come through loud and clear at these events,” Venable says.

Youth programs have also become a major part of the museum’s outreach philosophy.

Art Explorers are museum educators and artists who go to schools and introduce children to the Speed’s art collection with hands-on activities. Eventually the children are brought to the museum so they can see the works they have already discussed. The goal is to make them feel comfortable with art before they step into the museum.

The summer Youth Apprentice program has teenagers teach workshops related to the Speed’s art at senior centers, libraries and daycare centers. It also gives the apprentices a chance to learn about art careers.

The most obvious outreach is the renovation of building and land by wHY Architecture. The work will start in autumn of next year, with completion slated for 2012.

“In our planning — from hours to educational programs to Art After Dark to exhibitions and re-installations of the permanent collection — we have been challenged or motivated by Charles Venable to always think about how best we can serve our public,” Weaver says. “This attitude is a motivating, underlying guide to present planning and changes, as well as plans for our expansion. I agree with Kulapat Yantrasast (lead architect from wHY Architecture) that he is refreshingly unique in the museum director world in that he balances scholarship, knowledge of and passion for art with a real understanding and commitment to the public and diverse audiences.”

Dallas’s loss is our gain.

Suzanne Weaver, 49, left the Dallas Museum of Art (DMA) at the end of last year to move to Louisville and become the Speed Art Museum’s Curator of Contemporary Art. Turns out it’s been a good fit for all concerned.

“I knew I could live here in five minutes,” she says. “There’s a soul here. Louisville is a big enough town to have culture and small enough to get together. Another thing I like here is the land — the public use of land. It’s part of the quality of life.”

Weaver started at the Speed in the middle of January. She had been at DMA for 13 years, working as associate curator of contemporary art. The Speed’s director, Charles Venable, once a colleague at DMA, urged her to relocate.

“Having known Suzanne for more than a decade, I (was) confident that she (would be) an exceptionally good fit with the Speed’s ambitious plans for its contemporary art program,” he says. “Her ability to spot talent before others do has enabled her to make great acquisitions early on in the career of an artist.”

Weaver’s been busy since she arrived, working on, among other duties, “The Dorothy and Herbert Vogel Collection: Fifty Works for Fifty States” exhibition that opened in March (reviewed in the April 29 LEO Weekly), and “City/Country: Photographs from the Henry V. Heuser Jr. Collection,” on display now (reviewed in the Aug.12 LEO Weekly).

“There was a lot on the books for me to do,” she says. “No one knows what it takes behind the scenes.”

Inherent in anything Weaver does is her interest in artists’ rights. “I relate to artists’ rights in a broad, global way,” she explains. “It’s my primary role. I will go to bat for artists to make sure artists are treated fairly in the museum.

“I am not an expert. If I were not so old, I would go to law school to become an intellectual property and copyright lawyer — well, I might not be a lawyer, but I see one of my primary roles is as an advocate for artists. I incorporate that philosophy in all I do.”

Many outside the art world do not know that artists have rights, even after a work is sold. The Visual Artists Rights Act of 1990 is based on the concepts of moral right and creative property, not ownership. For example, if a contemporary artist learned an owner had intentionally or negligently destroyed his/her painting, that artist has the right to request compensation or even sue.

“I am a late-bloomer, but once I figured out my purpose and passion, I put my whole life into being a museum curator and an advocate for contemporary art and artists,” she says.