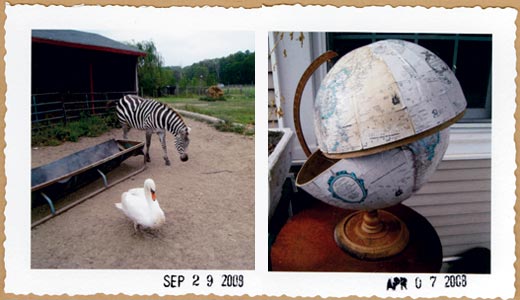 It seems that people who take themselves too seriously — the kind who buy nicer cameras than they really need and post close-ups of roses and “textures” on their Flickr pages — are unsatisfied with the ranking of snapshots within the American artistic canon. Why? As Michael Winters explores in a new exhibit at The 930 Gallery, the snapshot is a proud artifact, worthy of our attention as it is and was.

“It’s amazing how much subject matter in snapshots is the same over the last hundred years,” says Winters, organizer of the exhibit that was inspired by The National Gallery of Art’s “The Art of the American Snapshot” in 2007. Winters combines new work by local artists Travis Shaeffer, Stephanie LaGreca, Courtney Hughes and three others in the main gallery with his personal found collection of antique snapshots upstairs.

Intrigued by snapshots as both artistic and historical artifacts, on the cusp of extinction in the dawn of the digital age, Winters wanted to explore the relationship of the snapshot to memory. His collection of vintage and antique snapshots is exhibited in a line of white frames, each holding a black-and-white photograph no larger than a deck of cards. He and his wife, photographer Mickie Winters, bought this collection piece by piece from flea markets and antique stores while traveling across the country.

His infant son Owen naps in his arms as he points out the recurring themes of the exhibit: “Pictures of families … the aftermath of natural disasters … dress-up occasions … It seems we all want to remember the same good things,” he says.

The exhibit outlines how the snapshot developed in the last century, how it has changed in the digital age of photography, and how it subtly displays how we spend less time composing, developing and contemplating snapshots than our grandparents would have. The difference in the weight of the endeavor of photography can be felt as we come downstairs and into the gallery space where the new work is posted. “When people first got their hands on portable cameras, snapshots were arranged to look like studio portraits,” he explains. “But then as cameras became more abundant and film got more affordable, people started taking pictures of beer cans on logs — anything. The subject matter got progressively more mundane.”

After grazing the gallery awhile, I notice a series of photographs that seem to be vivid, old, colored Polaroids. In fact, they are digital photographs printed as vintage snapshots, complete with a white edge and time stamp. Winters shot the series on that same cross-country trip where he snapped up all the antique shots in the upstairs portion. “I’m trying to give the digital photograph the weight and reverence of a printed object — the kind of reverence that the snapshots upstairs evoke.”

Every entrance is an exit, and in entering the digital age, we inevitably leave behind the precious, thoughtful tangibility of the printed object. When nostalgia sets in, it seems inevitable to admit the end must be nigh. Whatever the future of the snapshot may be, its history is worth taking the time to examine.