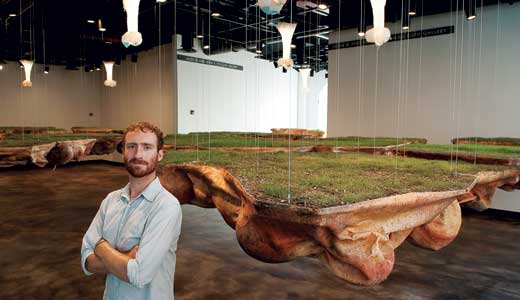 The first thing you notice about “Nineveh,” Ezra Kellerman’s site-specific installation at the Cressman Center, is the way it transforms the gallery. Upon opening the doors, a bright gust of delicious grass-infused air greets you. Beyond the doors, a sea of floating grass-covered islands invites you to explore. A child could run clear beneath them; but anyone tall enough to ride a roller coaster has to ditch conditioned gallery decorum and follow the maze of narrow corridors Kellerman has left for circumspection of the sculpture. In doing so, you will almost inevitably bump into it, or someone else who is trying not to bump into it. That, for Kellerman, is precisely the point.

“I wanted to set up an environment in which people would be forced to negotiate their passages, one by one, with other people in the space,” he explains. “Specifically, I wanted to explore how people decide who will go backward, or forward, when there is only room enough for one. Who will back up? Will both parties agree to go the same direction together? Will someone try to slide by in an attempt to not disturb the other person? What interests me are the similarities between that micro negotiation, and the negotiations that take place between large groups of people in competition for increasingly scarce natural resources.”

So clearly, “Nineveh” is a social sculpture, one that needs people to walk around in it to be fully realized. I had such a good time checking out the astounding fabrication for the first five minutes that I didn’t realize how funny everyone looked with their heads bobbing over the top of the grass like carnival gophers. It made me laugh. The atmosphere, when full of people, is a hive of pastoral activity, and empty, when I visited it in the off hours, carries the contemplative lightness of a Zen rock garden.

“I chose Nineveh, a region that was once an ancient Iraqi city, as my metaphor for an environment stripped clean by time,” says Kellerman, who was intrigued by the duality of Nineveh’s identity as ancient metropolis and current territory in Kurdistan. The sculpture, inspired by the factual place, lacks any markers that would suggest a specific earthly origin and instead seems to exist, flaunting the laws of gravity, outside of time and space.

With support from the Cressman Center and 21c Museum’s International Contemporary Art Foundation, Kellerman built 51 individual units that collectively compose “Nineveh.” The live turf, which is responsible for the lush outdoorsy smell in the gallery, only penetrates about as deep as a layer of sod, which keeps the pieces light and manageable. The individual pieces will swing a little if you bump into them — and you probably will, but don’t sweat it. Earthworms and ants, which live in the soil, occasionally fall overboard onto the spotless gallery floor. Pieces of dried grass stuck to the bottom of the sculpture, which for all intensive purposes resembles a sack of basketballs in a burlap sack, are an endearing reminder of its surely labor intensive craftsmanship. Kellerman also engineered a sustainable irrigation system that waters the sculpture during its month-long display period in the gallery. The system, which hangs from above, resembles transparent conglomerations of long-stemmed boobs (which also made me laugh). The way “Nineveh” transforms its original environment is a good example of how thoughtful intention, with careful execution, can produce intoxicating byproducts of successful art — wonderment and delight.

“Nineveh” also represents a green response to the urban and industrial meditations on collapse and destruction, a theme captured by photographer and performance artist Gordon Matta-Clark in the ’70s, when he took up residency in abandoned buildings and warehouses, cutting through their walls and roofs so that he could marry the inside and outside in a single photographic image. His photos were a visual meditation on what was, and what would soon be no more. In his work, Matta-Clark invited us to peer through the lens of the present into the unavoidable future. Kellerman’s “Nineveh” challenges us to contemplate our collective future based on the outcomes of our past. How will our environment impact the way we interact with each other? As climate change becomes increasingly evident within our lifetimes, how will the narrowing of our resources affect the way we negotiate with one another? For the soul who ponders such heady questions, Ezra Kellerman’s “Nineveh” is a playground of the possible.