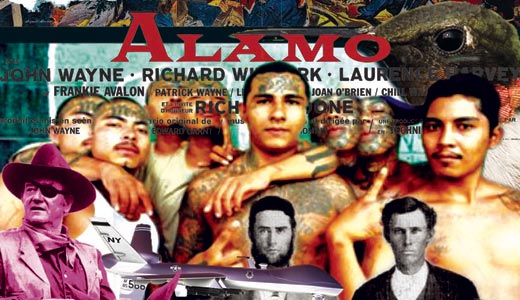 In his new exhibit at Art Ecology, digital artist J.B. Wilson uses a colorful combination of images and words on illuminated panels. Wilson says he presents the bling, flash and circus in “I’m an American,” which launched during the First Friday Gallery Hop and runs through October, in part as a reflective commentary on the overindulgence of advertising in this country.

“In 2009, we are completely saturated with image in our culture,” Wilson says. “The marketing and branding ability of the 21st century marketplace has altered our culture to the point that we define ourselves to one another with product and image instead of physically and emotionally.”

Each of the large light boxes that line the gallery walls makes a bold statement about American culture in pop art fashion. Wilson chose to showcase his works using light and projection because the digital images he uses were created with light on a monitor or projector.

In “Alamo,” Mexican-Americans are featured along with historical images while John Wayne is shown riding a horse and sporting an eye patch. In “WAL mart,” men are shown being stomped in front of the big-box storefront. “M1A1” depicts a battle tank with a cartoon-like explosion. Wilson says he hopes to present a new way of looking at and perceiving images. “I know every battle tank. I’m not a soldier. I just picked it up from things like Thunder Over Louisville. It’s just from being a man. I can’t tell you the last 50 presidents, but I can tell you what gun you’re holding.”

In “Self Determination,” Native Americans are shown performing tribal dances against a hot pink background while unicorns graze in a meadow. In “God is an American,” landfill waste, fast food signs, the bright lights of Las Vegas and even Victoria Beckham collaborate in one big circus. In “Westernaires,” a row of cowboys and girls parade their horses and wave American flags with the enthusiasm of a Civil War re-enactment.

The opening also marked the first anniversary of Art Ecology, which Wilson co-founded with Karla Diehl. Art Ecology features a variety of local artists and brings their work to your home, whether you prefer a simple print or a tile mural. ?

“The approach is very holistic,” Diehl says. “There’s a wide range of people that come in. We want them to see a different perspective while supporting local artists and our local arts community. We want to affect people — make them think and feel.”

Wilson is also featured in the children’s art book “Louisville Counts!” — which launched Sept. 4 — and satisfied several autograph requests during the opening.