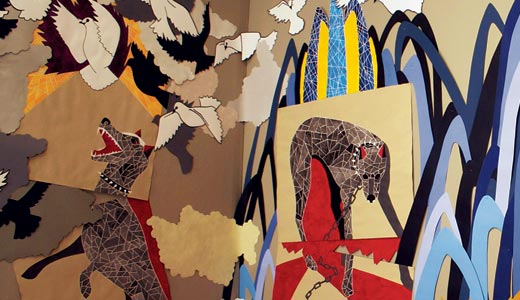 These days, Alice Stone can be found perched up on the third floor of the Kentucky Museum of Art and Craft. Since being named KMAC’s artist-in-residence last month, she spends her days cutting and crafting collage pieces for the large-scale installation she’ll spend the last six weeks of her residency installing, starting in November.

She’s moved into her Airstream trailer-sized studio and has already begun the preliminary work for her installation. On the day I stop by, she has enormous stacks of colored paper fanned out on tables, scissors and sketchbooks scattered about, pictures and postcards tacked onto the walls. In short, she’s only been there a few weeks, and she’s already padded out her new nest and gotten to work. Though at first glance she might be mistaken for an angel in a cream-cheese commercial (due to the tender halo of golden ringlets that crown her face), this multimedia magpie’s work has set her on a course of migration, which led her to Louisville and will ultimately take her to recognition alongside creative contemporaries like Maya Hayuk, Miranda July and Lisa Frank.

Hailing from Georgia, she’s been away since graduating from the University of Georgia with a BFA in painting a handful of years ago. A subsequent stint in Knoxville, where she got a masters from the University of Tennessee, preceded her landing in Louisville. But her real education, she explains, began much earlier, when her grandmother, also an artist, took her to visit artists in their studios as a young child.

“My grandmother and I were a lot alike,” she says. “My family didn’t really understand us. They would drop me off at her house and go watch a football game.”

Being a spectator has never satisfied Stone. She began drawing at a young age, and as an only child, used sketching as a way to occupy herself when in the company of adults.

“It wasn’t until I got to university and started studying folk art that I realized all these people in their eccentric houses that my grandmother was always taking me around to visit were real, legitimate artists who I would read about in my textbooks,” she says.

Stone mentions that her grandmother, who passed away a few years ago, left her with an inheritance of artifacts from the likes of folk artist the Rev. Howard Finster. So it seems no small coincidence that Stone’s work deals the same concerns that permeate that work — evangelical religion, mass culture and consumption, regional identity and the problems with that. Actually, it seems like the logical inheritance of her pedigree. She likes referencing the explicit and implicit material culture from which she emerged, using staples in her installations because “they remind me of the bulletin boards in schools and churches.” Even this far from home, she incorporates the symbols of her deep Southern religious heritage, calling into question its meaning by manipulating its iconography.

In her installation “Sanctus,” Stone depicts vibrant childhood impressions of religion in neon hues. A unicorn bursts out of a patchwork of candy-colored church bulletins, surrounded by an energetic frenzy of twin

popsicles, robots, doll clothes and glitter. The church bulletins she uses in the background she solicited from churches all over the country, intrigued by the regional particularities inherent in each. “I called about 300 churches nationwide and acted like I was moving into the area and was interested in finding out more information about the services they offered,” she says.

In her installation “Skotias eti ouses,” Stone highlights the individuality of the bulletins by using each one as a background for drawings she would do at night, she says, while watching TV and tuning in and out of her surroundings, “kind of like the way I used to draw in church as a kid. I didn’t come to each bulletin with an agenda for what to draw, I let myself be inspired.”

eti ouses” are like the difference between rhyming and non-rhyming poetry — the gap between the particular and the abstract, the focused and the periphery. It can also be likened

to a map of the way a disengaged person experiences church — thoughts intermingle with secular imagery, the words and symbolism of the church perfuming consciousness.

“When I was younger, I used to give my all to each and every thing I made, to treat it as an individual item never to be produced again,” Stone says. “But as I get older, I’ve begun to think of my work as a series of experiments. Now, most things I produce are part of a series.”

Or a flock. Many of the images in her installations come in multiples, clusters, congregations — TV-dinner trays, pigeons, fountains and leaves. To enter into a room where “I Have No Bread to Give You” is installed is to be enveloped into the overwhelming scale, saturated colors and the unified spectacle of the creation that is the evangelical experience. In this installation, Stone contrasts her childhood relics with wolves, covenant-breaking Biblical characters and disco balls. The stumbling drunk Noah and the incestuous Lot contrast the ascending doves. Fountains of mysterious origins pour out all around them in cerulean confidence, as mountains glow in the background.

For her installation at the Kentucky Museum of Art and Craft, Stone is planning to explore the connection between the church atmosphere and the experience of being in a doctor’s waiting room. “In both, you are waiting for something to happen,” she muses.

She has a dozen uncomfortable-looking chairs the size of golden retrievers already cut out, and a small army of clipboards in a file cabinet already drawn. Just looking at them, I catch whiffs of latex gloves and stale magazines.

“I’m ready to be influenced by Louisville and what this place has to show me,” she says. Although she may look like she’s just doodling, be sure that even three floors up, tucked into her small room, this artist astutely and quietly is paying attention to everything around her. Soon, Louisville will have the opportunity to pay its attention to her, and see what she has found in our city worthy of weaving into her domus ecclesia.