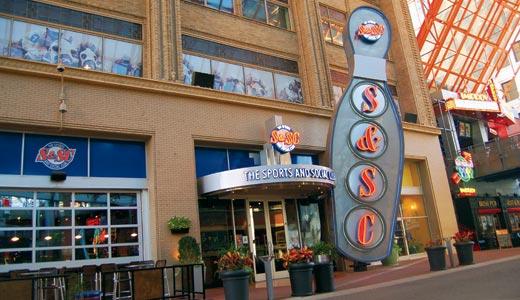 I take a seat at the bar and order a Miller Lite. After a minute or so it arrives in a disposable plastic cup emblazoned with the words “Sports & Social Club.” The beer is cold and cheap, and I wander outside where, atop a stage dominating the main thoroughfare of Fourth Street Live, a four-piece country rock band is electrifying an audience of about 300. The mandolin player is jamming on a solo bridge as the cowboy hat-clad lead singer steps back from the mic, stomping his foot in time to the music and blowing kisses to a throng of a dozen-or-so pubescent girls who’ve stormed the front row.

Maybe it’s the fact that I’m drinking my second beer on an empty stomach, but the whole scene brings to mind, oddly, the plight of Louisville Metro’s relationship with The Cordish Cos.: Emotionally insecure, desperate and suffering from some serious body issues, the city found in the Baltimore-based real estate company an all-too-willing partner — one who’d overlook an ugly duckling’s shortcomings and invest in her downtown property at a time when nobody else would.

Of course, this assessment isn’t entirely true. Downtown has experienced a steady rise in capital building and redevelopment projects over the last decade from smaller local development firms. Yet like any story of high school romance, these developers have been labeled “just friends” in lieu of an undying, almost zero-sum love for Cordish.

The fruits of the city’s ongoing romance with Cordish are pretty much public knowledge by now, but for the sake of some context let’s look them over. There was the initial granting of tax increment financing district status and ridiculously low land-lease options to create Fourth Street Live on the site of the former Galleria; the city’s pledging of $25 million (and a dollar-a-year lease for 100 years) toward the proposed $442 million Center City[1], a Fourth Street Live expansion project the company is required to spend $200 million on; and, finally, shelling out $1.8 million in forgivable city loans to renovate 20,000 square feet of ground level retail space in the Starks Building, a deal that ultimately fell through and gave way to the Sports & Social Club, which ostensibly used $950,000 of the aforementioned loan to renovate the former Lucky Strike bowling lanes into the Sports & Social Club.

I had assumed the city’s “Audit Team” — composed of Metro Economic Development’s Bruce Traughber, David Morris, Ellie Shipley, and City Auditor Mike Norman, and led by Metro Council President (and mayoral hopeful) David Tandy, D-4 — would’ve come back from their Baltimore trip with a report full of facts, figures and invoices to put to bed, once and for all, the intrigue of impropriety surrounding the property, thus sparing me the task of examining, calculator in hand, every nook and cranny of the Sports & Social Club. Equally, it would have assuaged concerns that the city has been negligent in its accounting of how taxpayer money is spent.

But they didn’t. Taxpayers were instead presented with a four-page letter of assurance devoid of facts, figures and invoices. Apparently that’s all “proprietary information,” data owned by a private company, and Cordish claims disclosing these things (i.e. how the money was spent) would be tantamount to undercutting their competitive edge. Tandy & Co. were also prohibited from discussing in detail the Cordish-compiled information that was presented to them at LG Financial’s[2] headquarters — information that wasn’t subject to independent verification and so is, at best, an assertion of fact, not fact itself.

Adding further confusion is a letter drafted by Chief Metro Auditor Norman prior to the Baltimore trip. In it, two different outcomes are written, Mad Libs-style: one in which Cordish had spent the money appropriately, the other attesting that they had not, both of them ready to go as soon as the final verdict was announced. When asked whether it is common audit procedure to draft potential outcomes ahead of the audit, Norman responded via e-mail that “it is an exception, not the rule,” and that the office of economic development had asked him to do so as per the terms of the confidentiality agreement signed by Louisville Metro’s envoys with Cordish.

Which pretty much brings us back to square one.

Between songs, the lead singer of the band tells the crowd how happy he is to be back here, at Fourth Street Live, that it’s been too long. The crowd roars and salutes him with disposable plastic cups. But I’m not here for him, his rarefied mandolin player or his boot stompin’.

I’m here to reverse-engineer this restaurant, one plank of plywood at a time.

Obviously, this is easier said than done: Without any concrete data or itemized lists of expenditures to go on, the task becomes a kind of thought experiment.

Along these lines, I had attempted to enlist the help of virtually every commercial contractor in the city over the past several months. Their response: Louisville, they told me, is a small pond, and they weren’t interested in causing any dangerous “ripples,” despite promises of anonymity. In other words, “Sorry boy, but you’re up shit creek. Good luck though!”

Yet a small contingent of developers — those who didn’t run screaming for the hills — helped me devise a metric by which unit costs could, when multiplied by the S&SC’s square footage of 8,500, extrapolate a reasonable approximation. This would require actually going there, doing reconnaissance under the guise of a Miller Lite-drinker with a fondness for mandolins, and eating greasy food. It would also require an exhaustive list of every expenditure, fee and erstwhile hidden cost typical to nightclubs/restaurants, including (but not limited to) alcohol licenses, building permit fees, operating costs, electrical work, drywall installation, bathroom fixtures, etc.

So bear in mind that while this is just a guess, it is at the very least an educated one. Additionally, where actual figures weren’t available, contractor-informed estimates (favorably inflated to give Cordish the benefit of many doubts) were substituted. Also, items like painting, flooring and other surface area-dependent costs were multiplied across the S&SC’s full 8,500 square feet — again giving them the benefit of the doubt.

According to available records, electrical, plumbing and fire suppression costs round out to $40,000. The giant, neon-lettered bowling pin? Try $7,000. The plethora of Panasonic high-definition televisions and the club’s sound system work out to the tune of $110,000. Add a few thousand for liquor licenses, $6,500 for mercantile/business-permit fees, $20,000 for new kitchen equipment and about $60,000 to cover inventory (i.e. food, liquor, to-go boxes, furniture, etc.) and you’re looking at a total of $243,500 in “soft costs.”

The remaining soft costs are more nebulous (sewer/trash fees, insurance, architectural/developer’s fees), yet when combined shouldn’t exceed more than $150,000. This adds up to a generous $400,000 out of a possible $500,000 in non-construction expenditures.

Then there are the actual construction costs, which the building permit for 427 S. Fourth St. lists at $450,000. Much of the physical results I’ve examined (with the aid of developers) appear to be significantly less than the costs attributed to them on paper. To wit: The facade, which supposedly cost $20,000 and includes an all-glass, wainscoting treatment, isn’t all-glass and features no wainscoting whatsoever. In fact, a city official confirmed Tuesday that Metro threatened to fine Cordish because the facade violates regulations for downtown buildings.

That said, the facade’s true cost appears to work out to the tune of $7,500-10,000. The bathrooms, which were described to me as “standard commercial bathrooms, nothing fancy,” fetched roughly $4,000 apiece. Drywall, paint, stud walls (used to support heavy things like plasma TVs), flooring and ceiling work add up to about $86,000. Factor in roughly $20,000 for three new bars (each of them composed of the same plywood that covers one-fourth of the facade) and their equipment, and $510 for the building permit fee, and it’s $124,510.

All that’s left are other unknowns, like construction labor and the cost of the actual demolition, the latter of which should be reigned in a bit due to the building plans’ assertion that multiple areas — like the kitchen, half of the bowling alley and much of the main floor space — remained virtually untouched. Therefore, these add up to (another generous) $200,000, for a total of $324,510 in “hard costs.”

Combining hard and soft, the grand total is about $725,000 — roughly $225,000 short of the total $950,000 forgivable loan granted by the city. Cordish can claim at any time that the remaining difference is part of their developer’s fee; some unaccounted-for bit of technical minutia; that I’m full of shit and don’t know how to use a calculator; or all of the above. The company declined to comment for this story.

The point is that we will never truly know, which is a sad reality and a poor reflection on the city’s willingness and ability to account for public money. This thought experiment represents the only ascertainable way (a last resort, really) to account for as many dollars and cents that were spent in secret, right under our noses.

1) Pledged at a time when the city projected a $20 million shortfall for fiscal year 2009, arousing much political rancor.

2) A subsidiary of The Cordish Cos.