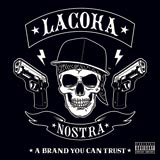 House of Pain is back! Before you turn up your noses, kiddos, take the history lesson. HoP’s first album was a near-classic, not just the hit-turned-cliché “Jump Around.” After three albums, leader Everlast went solo to great acclaim (a spin on the “old punk goes folk” pattern, he went from rap to a kind of blues hybrid). Now, the House has been rebuilt, adding two new emcees (Non-Phixion’s Ill Bill and Special Teamz’s Slaine) and a host of ridiculous guests from each member of Cypress Hill (separately) to Snoop, Bun B and Immortal Technique.

The album is surprisingly good. Everlast sings almost as much as he raps on the disc’s 15 cuts, and while his voice is a bit smokier (shocked, I know), he hasn’t lost a step over the years. “The Stain” would fit on his Whitey Ford album, and is a highlight. Several cuts have a strong mid-’90s Cypress Hill feel (a good thing) including the Alchemist-produced “Choose Your Side,” an easy single choice.

While A Brand will not propel them to their former glories, this is a fully satisfying disc that is a nice balance of nostalgia and renewed energy.