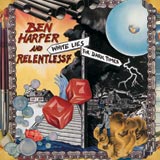 If Ben Harper’s back-up band, Relentless 7, sound unfamiliar, then you’re on the same page with me. On White Lies for Dark Times, Harper’s ninth studio album, he abandons The Innocent Criminals to test the water with new friends.

Blurring musical lines between funk, soul, rock, gospel and folk has always been Harper’s forte (note: his collaborations with Pearl Jam, Blind Boys of Alabama and John Mayer). Unchanged here, he will always be the freewheeling, anything-goes Harper, but this time he sounds grittier and more than just a little raw. His serpentine voice is as versatile as on his modern classic Fight For Your Mind. The addition of a second guitarist Jason Mozersky offers a thicker, more compelling and textured sound than generally expected from Harper’s previous albums.