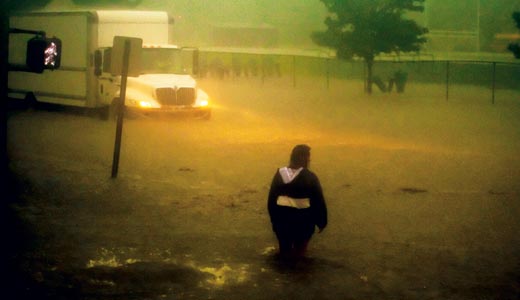 When Brittany Bullard left her home at 7:45 Tuesday morning, she noticed it was unusually dark for such an early hour. After dropping her mother off at University of Louisville Hospital — where, Bullard says, the sky “looked like it was 11 o’ clock at night” — she continued her carpool toward Indiana University Southeast for a routine day of classes.

Then the sky, dark and moody, exploded.

“By the time I got to the Sherman Minton (Bridge) it was pouring down so bad I couldn’t see.” Virtually stranded in her car and watching torrents of water cascading from the interstate onto the increasingly pond-like ground below, she called her mother at the hospital, where they were already evacuating the first floor. “Luckily, my mom works on the ninth floor, so she wasn’t in any danger.”

At roughly the same time, Matt Stottmann, a manager at Quiznos on Fourth Street and Broadway, had just arrived to begin his opening duties. “I didn’t notice the flooding until about 30 minutes after I got to work,” he says. “Then I discovered that the mop sink was shooting water 5 feet into the air. Shortly after, anything that could leak did leak. Faucets, toilets, drains, you name it.”

Stottmann admitted a dozen unfortunate passers-by to take refuge inside the leaky restaurant. Manholes erupted in the street, jettisoning their covers high into the air. Quarter-sized hail pelted the street-front windows. Hell, as it must’ve seemed to them then, was a very wet place.

As the storm reached its zenith, adoption coordinator Rebecca Riggs was just beginning her morning shift at the Metro Animal Services shelter on Manslick Road when “all of a sudden it started to flood. Water was coming in from everywhere. It was insane.”

The scene Riggs describes was a desperate one: With less than 15 staff members to manage the safe transfer of more than 500 animals, and the water rising so quickly external help could not be counted on, Riggs & Co. worked franticly, systematically elevating the animal cages to higher ground.

“I had, like, a nervous breakdown in the cat room,” she says. “It was one of the worst things I’ve ever seen. We didn’t even think about the cats, we were (in another building) at the time. I had just checked in on them less than 15 minutes before. By the time we came back the water was so high … the adult cats were up, but a lot of the kittens weren’t, they couldn’t climb. We worked as fast as we could to get them out of there. One of our employees, it was her first day, and I was trying to tell her, ‘It’s not always like this, I promise.’”

By the time the immediate airborne assault was over, and an assessment could be made, 10 kittens and one dog had drowned. Outside, visibility returned, and two hours of traffic later a friendly semi-truck driver had finally pulled in to transfer the animals in one fell swoop to the Fair and Exposition Center’s West Wing.

Meanwhile, Brittany Bullard pointed her car toward her Chickasaw Park home, where she found her stepfather already in the process of airing out her personal belongings: Their basement — Bullard’s room — had flooded. Her bed, clothes, appliances and furniture were on the front lawn, tainted by a black sewage that could now be found throughout Louisville’s urban core.

“We do have renter’s insurance,” adds Bullard, “but at this point we’re not sure if it’s it worth it or not to make a claim.” She mentions that she was planning on borrowing a wet-vac from a friend, then laments having to move upstairs. “So now we have the added expense of buying a carpet shampooer. We want to make sure there’s no mold or mildew down there. It’s just an annoyance, a lot of added expenses, really.”

The freakish, once-in-a-lifetime torrential downpour that mercilessly hovered over Louisville’s western and southwestern districts unleashed up to 7 inches of rain in less than two hours, generating countless stories of varying drama like the ones above. (By comparison, it takes longer to watch the movie “Titanic” than it took last Tuesday’s storm to flood schools, homes, businesses, hospitals, the airport, the main library, Churchill Downs, U of L, the Kentucky Derby Museum, a downtown Quiznos, and much more with hundreds of millions of gallons of sewage water.)

It also hit hardest those areas “already suffering from economic disaster,” to paraphrase a comment made by Mayor Jerry Abramson during a press conference held roughly 24 hours after the so-called “rain event” spectacularly overwhelmed Louisville’s antiquated — though no less voluminous — drainage system. At this point three drop-off sites, operated by the Metropolitan Sewer District, remain set up in the neighborhoods most affected to dispose of hazardous, waterlogged junk, and, for the third time in eight months, the lobbying process for Federal Emergency Management Agency disaster funds, which would reimburse the city for costs accrued cleaning and repairing roughly 30 government buildings, is under way.

Dribbles of these as-yet-unseen funds may trickle down in the form of low-interest federal loans to applicable homeowners, should the city successfully prove that at least 100 residences have been rendered permanently uninhabitable due to flooding, mold or sewage contamination. Otherwise, victims have been asked to either lean on their high-deductible insurance providers (provided they have it[1]) or, as exhibited by Mayor Abramson over the weekend via a premeditated cleanup assistance photo-op on South 39th Street, upon a fellow neighbor wearing thick gloves and a can-do attitude.

Although it remains to be seen whether they can keep the pace of demand and meet the mayor’s Aug. 16 deadline to clean up debris, various nonprofits, charities and legions of volunteers have begun to fill in the gaps traditionally created by natural disasters.

As visible as the signs of aboveground wreckage and recovery may be, what happened beneath the surface also bears mention.

Under a consent decree issued in 2005 by the Environmental Protection Agency, MSD is poised to receive $850 million in funding to bring Louisville’s 70-year-old sewers in line with federal regulations. Namely, this means reconfiguring the current system — which combines both sewer refuse and storm runoff into the same network — such that next time a historic “rain event” overloads the system’s capacity, that system will deluge your home with turd-free water.

But is there a way to prevent a deluge from happening at all?

Not really, according to Tom Rockaway, director of the Center for Infrastructure Research at the University of Louisville.

“There are always things that can be done,” he says, “but the problem is trying to come up with a reasonable economic balance.”

Rockaway says it’s difficult to predict or plan for events as rare and as extreme as the one that occurred Aug. 4, and that if a decision to exponentially expand the system’s capacity were undertaken by MSD, then a point of diminishing returns would quickly be reached.

“How much extra piping would you have to put in if you wanted to prevent manhole covers from bursting? It’s a decision that a community has to make on its own, whether it wants to pay for that when there might be other things that are more important to the community.”

Although the combined system is one of the largest in the world, Rockaway points out that if it suffers from any inefficiencies, it’s because it was built for a different time with different needs in mind. When MSD was founded in 1946, its primary task was to update the city’s sewers, parts of which hadn’t seen any kind of improvement since the early 19th century.

“It certainly wasn’t designed for these major events we’ve been having lately,” says Vicki Coombs, a team project leader at MSD. “Not for something that happens once every 500 years.”

What can be done, she says, is mitigation; specifically, the mitigation of urban runoff. Coincidentally, it’s a problem that routinely plagues the very areas of Louisville caught in the center of the storm: The prevalence of paved surface lots, combined with a lack of sufficient greenspace to absorb and therefore slow the diffusion of rainfall into the sewers, exacerbate this urban phenomena, despite the outdated sewers themselves. If capacity is the thing, and the urban landscape only aids the speed at which overcapacity might be achieved, then perhaps part of the problem occurring below ground is, in fact, occurring above it.

“We started putting together a green infrastructure program in 2005, as part of the consent decree,” Coombs says. “The idea is to give the rain more places to go besides a storm drain.” But, she adds, the reconstruction of the sewers is still under way, albeit at a very piecemeal and expensive rate.

Whether the debate over the future of Louisville’s underground metropolis of pipes leads the city toward more trees, more pipes or simply the prospect of non-exploding manhole covers, there is plenty of cleaning left to be done. The main branch of the Louisville Free Public Library, which was inundated with up to 14 feet of storm water in its deepest recesses, experienced at least $5 million in damages. Its basement offers an insight into what may be the flood’s greatest legacy: thousands upon thousands of books rendered into soggy pulp, the spines disintegrated beyond recognition, piled shoulder-high and carving a kind of muck-laden path throughout the building’s fetid, labyrinthine bowels.

It’s hard to realize what the impact of such an anti-social thunderstorm means until the results are made tangible. The destruction of books, of works of art, of kittens and quite possibly the upward mobility of too many unlucky residents will resonate in terms currently unforeseen. What’s clear is that there’s no real solution to withstanding gale-force hurricane winds, Siberian-grade winter storms or flash floods-on-steroids in a community of Louisville’s size, fiscal health and political resources.

The cleanup is barely a week old, and many are still in need of assistance. A dollar sign hasn’t been attached to the loss. Yet, in the coming months, buildings will begin to come back to life and memories of the panic and confusion will settle into place, and then fade with time. That is, until the asteroid hits.

[1] Federal assistance for uninsured victims has yet to materialize on a congressional level, if at all.