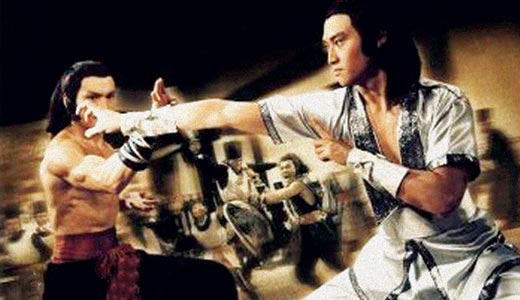 A glorious new pressing of the most imitated Kung Fu movie ever made! A dying martial arts master sends his last student on a quest: Locate his five most dangerous disciples and bring them together to rout a conspiracy that threatens to destroy their clan. But each of these mysterious, masked students has his own agenda and his own unique, deadly fighting style and may no longer be on the side of the clan. No silly side-plots or love interests, this is the grandpappy of the entire genre — a must-own by anyone who enjoys good cult cinema.

For what we are about to receive, please make us truly thankful. Amen. Toho Studios is releasing a boxed set of Ishiro Honda titles in their original TohoScope format! (If you know anything at all about cool monster movies, you should have just crapped in your cutoffs.) First we have the vastly underrated “H-Man (Bijo to Ekitainingen),” whose “liquid creatures” — melted Hiroshima victims! — haunted our pre-teen nightmares. Next there’s “Battle in Outer Space (Uchu daisenso),” a super-cool mix of Mysterians-style aliens and raygun battles that predates “Star Wars” by almost two decades. Finally, there’s “Mothra (Mosura),” the first Toho “good monster,” dedicated to the well-being of the people of Infant Island and its tiny nymph/priestesses. This is the deal of the century! Get off your butt!

A BOLSHOI OPERA NIGHT: A LIVE CONCERT FROM THE BOLSHOI THEATRE

The Bolshoi Theatre Orchestra, conducted by Mark Ermler, performs Verdi, Mussorgsky (a favorite source of material for Emerson, Lake and Palmer), Donizetti, Bellini and others in this benefit performance from 1988. In the largest opera-based rescue event ever held, 11 of the world’s highest-ranked wailers came together to raise money for the victims of a deadly earthquake in Armenia. Also known as “Holler Aid.”

Simply wonderful! A German-made thinking-man’s comedy about two would-be lovers who, on the eve of their night of perfect bliss, run into an unexpected obstacle: no water. Huh? It seems that the men of the town are kinda lazy, and the women are fed up, so when the town’s only water pipeline goes down, the women shut off the men’s “water,” too! It’s a town-wide ban on nookie until someone agrees to lay some pipe! What are the poor lovers to do?

We remember watching this Disney short as children, circa 1961, on Uncle Walt’s weekly love letter to America: “The Wonderful World of Color” (the very first cartoon ever broadcast in color). In it, Donald Duck (the voice of Clarence Nash) learns all about the fun and adventure to be found in numbers with the help of amazing hand-drawn animation, “The True Spirit of Adventure” (the immortal Paul Frees) and terrific musical numbers courtesy of Buddy Baker. A true piece of Americana; never again will we see its equal. A must-own.

EVERYBODY HATES CHRIS: THE COMPLETE SERIES

Has it really been four seasons already? Man, how time flies! And, yes, CBS, in its infinite wisdom, has canceled this shining gem of a show, inspired by Chris Rock’s early-’80s childhood in Brooklyn, N.Y. Both his parents work, so 13-year-old Chris is called on to be the Man of the House … even though no one will listen to him. And it takes a half-dozen bus transfers to get to school, where only his quick wit and fast feet keep him from getting beaten up daily. One of the best, funniest and most heartfelt sitcoms we ever saw; buy it now and preserve it for future generations.

LAST HOUSE ON THE LEFT

Unnecessary remake of the Sean Cunningham/Wes Craven shock-cinema classic, this one starring Tony Goldwyn, Monica Potter and Sara Paxton. Murdering rapists unwittingly hide in a house owned by one of their victim’s parents. Ask for the original.

Considered by many as “The World’s First Teen-Titty Movie” — and the genesis of “American Pie”! Yeah, there had been teen sex comedies before, but none displayed the sense of fun — or more glorious highbeams — than this one. A pair of nerds must share a room with a pair of players amid the wet T-shirts and beer-driven debauchery of spring break on the beach. Produced and directed by Sean S. Cunningham of the original “Last House on the Left.” Also available — and highly recommended — “The Hardbodies Collection” ($14.95) featuring the song “I Don’t Fuck Fossils for Free.” Legendary.

This may be the best movie you’ve never seen, even if you don’t give a damn about sports, boxing or Mike Tyson. Director James Toback had unlimited access to Tyson, his longtime friend, and was able to get past that gauze of menace that he wears like a second skin. The result is a truly exceptional doc about a truly misunderstood — and surprisingly intelligent and sensitive — man learning to deal with the inevitabilities of life. Recommended.

One of those brainless CGI dragon tales that the SciFi Channel poops out with weekly regularity, with one exception: This was the last monster-movie appearance by the late Don S. Davis. A veteran of some 150 TV and movie appearances, he was most recently known as General Hammond from “Stargate: SG-1,” but also lent his talents to “21 Jump Street,” “MacGyver,” “Twin Peaks” and was Dana Scully’s dad on “The X Files.” He will be missed.

SONS OF ANARCHY: SEASON ONE

THE SIMPSONS: THE COMPLETE TWELFTH SEASON