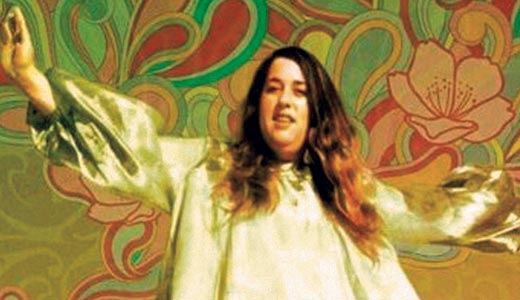 Whereas “Spring Break” (which we covered in last week’s sermon) is oft remembered as The Original Teen Tittie Movie, “Screwballs,” released the same year, kept the bikinis and nudity, but ratcheted up the raunch to levels even Vaudeville never dreamed of. The genius behind it all was the immortal Roger Corman. He brought together demented writers Linda Shayne (who co-stars as Bootsie Goodhead) and Jim “Attack of the 60-Foot Centerfold” Wynorski, and then cast boobilicious Nanci Chambers (now of “JAG”) and Russ Meyer’s Raven DeLaCroix (“Miss Anna Tommical”) as busty stooges. Now available on Blu-Ray, completely uncut and highly recommended.

This is a cool bit of ’60s history. ABC wanted a lively, colorful variety series starring Cass Elliot of The Mamas and The Papas. So the studio suits populated the pilot with Buddy Hackett, Martin Landau and Barbara Bain, hoping for “family hour” pabulum. But Cass invited her Woodstock friends Joni Mitchell, John Sebastian and Mary Travers — all of them full of the righteous spirit of peace and love and social justice that was at its ’60s zenith — the three women capping it off with a devastating cover of Bob Dylan’s “I Shall Be Released.” ABC was pissed. They demanded that her guests be cut. She refused, and all that we have to remember what might have been is this single episode, long thought lost. Priceless.

Disney attempt at a Judd Apatow-style comedy. Jesse Eisenberg stars as a college guy who takes a job at a crappy carnival park in 1987 where he falls for comely Kristen “Twilight” Stewart while wacky things happen all around. The shining light is Ryan Reynolds as their sort-of boss. Not bad, kinda fun, but don’t understand the R rating.

Troubled teen Mila “That 70s Show” Kunis is sent to a “serene tropical paradise” for counseling, except that the place is, in reality, a brutal prison where kids are beaten and brainwashed. Her boyfriend gets sentenced to the same hell-hole in order to help her escape. Kinda fun.

First Blu-Ray release of this anime series, based on the insanely popular extreme combat vidgame (originally destined to be a Resident Evil 4 spin-off for the PS2). A live-action movie is rumored for 2010.

A damn entertaining throwback to the days of Grant and Hepburn. Clandestine lovers Julia Roberts and Clive Owen are terrific as a pair of sexy ex-spies who now make their living as corporate spooks. Written and directed by Tony “Michael Clayton” Gilroy, co-starring Billy Bob Thornton, Tom Wilkinson and Paul Giamatti, this is how you make a movie!

Bruised and bloody Terrance Howard literally fights for the love of Channing Tatum in this “Never Back Down” rip-off. Simply terrible, but in a fun way. Here’s a great party game: Take a shot every time you see a boom mic.

A Senegalese cab driver helps a bitter cracker come to grips with the 20th century as they journey through Winston-Salem, N.C. A well-written dramedy about timeless friendship and the universality of family — and a status report on The American Dream.

Hugh Laurie continues to shine in the best damn TV show ever. An inarguable genius, he remains hopelessly addicted to Vicodin and tortured by the knowledge that he was responsible for the death of his only friend’s soulmate, all the while sliding slowly into madness — and it’s funny as hell! The season finale is brilliant, breathtaking TV.

LIE TO ME: SEASON ONE

Frankly, we don’t think much of this “House M.D.” rip-off starring Tim Roth as a guy who can “read” falsehood in others by their body language. Why? Because, much like “Numbers” and other “scientific dramas” of late, this is largely science fiction — or, in this case, discredited pseudo-science — being packaged as 100-percent-real, cutting-edge technology. So? Well, the average American viewer is too dumb to know the difference.

Amy Adams, Emily Blunt and Alan Arkin are terrific in this unexpectedly funny tale of a desperate single mom who starts a crime-scene cleanup business as a way to keep her family together — by spending their days literally knee-deep in blood, gore and the carnage of human folly. Recommended.

The best doc, by far, that we’ve ever seen on Hurricane Katrina. Why so good? Because it starts years before the storm, showing the darkest side of New Orleans, the part that tourists aren’t permitted to see. Within this sea of human misery, the hurricane is seen as just another case of cruel fate, inevitable in a way. The aftermath may be the most uplifting episode as survivors are finally helped for the first time in their lives. An intense experience.

10 THINGS EVERY GOLFER SHOULD KNOW

SAMANTHA WHO?: THE COMPLETE SECOND SEASON