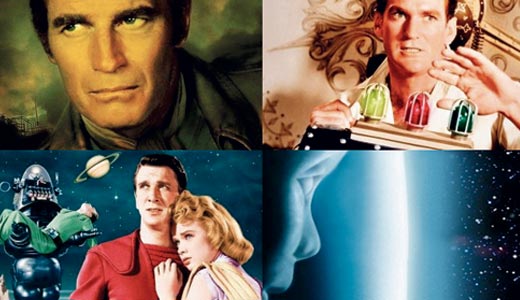 Wow! Turner Classic really knows how to package great old horror classics! This two-disc set contains Vincent Price’s career-making stunner, “House of Wax” (1953, 2-D version), along with arguably the greatest literary haunted-houser ever, Robert Wise’s “The Haunting” starring Julie Harris. Then, taking a cautious step back in time, we find local boy Tod Browning’s follow-up to “Dracula,” 1941’s “Freaks” — a movie so shocking that it nearly ended his career — and the Spencer Tracy version of “Dr. Jekyll and Mr. Hyde.” Much closer to the book than other versions, Hyde’s cruelties are focused on the lovely Ingrid Bergman — with luscious Lana Turner as Jekyll’s bride-to-be! As perfect a quartet of films as could be imagined …

… Unless the topic is sci-fi! Starting with Stanley Kubrick/Arthur C. Clarke’s vision of man’s ultimate destiny, “2001: A Space Odyssey” (1968), we move to our far-more-likely end (as illiterate cannibals) in “Soylent Green” (1973) with Charlton Heston and Edward G. Robinson in his final role (as a Triscuit). Another step back in time reveals Leslie Nielsen and the jaw-dropping beauty of Anne Francis in “Forbidden Planet,” then George Pal’s perfect take on H.G. Wells’ “The Time Machine” (1960) with Rod Taylor and Yvette Mimieux. Simply brilliant.

A fun Discovery Channel “doc” that depicts man’s first discovery of life on another planet, Darwin IV, represented as realistically as possible with live action and CGI renderings based on the best scientific evidence available.

ESPN favorite Michael Vega stars in this gay “getting romance advice from the ghost of my deceased lover” outing. Gay or straight, this simple little romantic-dramedy is fun and life-affirming; a good, solid date movie, regardless of how you define “date.”

James Earl Jones narrates the U.S. version of this amazing doc culled from the vast archives of the BBC and Discovery Channel’s “Planet Earth” project. (The British version is narrated by Patrick Stewart.) Told as an interwoven series of animal-family tales, this marks Disney’s most ambitious foray into live-action nature films since the days of “Charlie, the Lonesome Cougar.” Recommended.

Antonio Sabato Jr. stars as real-life serial killer Henry Lee Lucas, who claimed to have killed 600 people (though the true number is probably far less) from the mid-’70s to mid-’80s. His death sentence was commuted by Gov. George W. Bush, and he died peacefully in a Texas prison in 2001.

Gorgeous Jordan Ladd stars in this rare beast: a truly good chick-horror flick. Her unborn child, dead in the womb, is allowed to come to term — and is born alive! But instead of mother’s milk, it has a ravenous appetite for blood. Oh, what’s a mother to do?

Whoa-boy! Talk about obscure! A four-disc set containing all 36 cartoons from the late ’70s. Don’t remember? They came on right after “Super Friends” on Saturday mornings. A Hanna-Barbera/Ruby-Spears co-production, Plastic Man could stretch himself into any shape — usually catching the bad guys more by accident than design. Also includes the adventures of tiny Mighty Man and Yukk, the world’s ugliest dog, plus Rickety Rocket, a living spaceship built by cool black dudes like Johnny Brown (Preacher from “Everybody Hates Chris”).

Forgive this guilty fave of ours from Disney. Roo and his little pal Lumpy are about to go trick-or-treating for the first time when Tigger scares them with stories of the dreaded Gobloom! A damn-fun snipe-hunt ensures, and everyone learns a valuable lesson. Ahhhhh.

What more could you possibly want to know? Absolutely perfect Halloween fun for the wee ones from those Wallace and Gromit guys.

We are big fans of Mick Hucknall, the extraordinary talent at the center of that ever-changing orchestra that is Simply Red (reportedly disbanded this year). Since mesmerizing early MTV-ers with “Holding Back the Years,” their sound became more World Music oriented, while never losing that unique Manchester jazz vibe that is so captivating. Recommended.

Russell Crowe, Ben Affleck, Rachel McAdams and Helen Mirren star in this excellent thriller that no one wanted to watch at the theater. Crowe is a reporter who uncovers a murder by Affleck, but corrupt business and political operatives manipulate the system, covering up the crime and putting Crowe at risk. A bit too real after having just survived the dark Bush/Cheney years, we guess.

Great biopic on Miguel “Azcar” Santos, the talented pitcher who fought his way out of Dominican Republic slums to play in an Iowa minor league team on his way to the majors, hoping to rescue the remainder of his family back home from a life of poverty and misery. Simply wonderful.

ALL IN THE FAMILY: COMPLETE SIXTH SEASON

TWO AND A HALF MEN: THE COMPLETE SIXTH SEASON