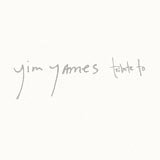 Yim Yames (aka, um, Jim James) is intimate in his six-track EP homage Tribute To, recorded a few days after George Harrison passed away in 2001. He captures the cathartic, healing power of the former Beatle’s music. We hear not the reincarnation of a dead man’s voice but rather the re-imagining of a spirit reminding us we shouldn’t mourn what isn’t lost. Energy doesn’t die — it merely transfers. Yames’s six recalibrations of these timeless Harrison classics, from the opening multi-layered “Long Long Long” to the closing meditative whisper in “All Things Must Pass,” reveal the penetrating force of souls in migration between Harrison and Yames, Yames and us.

John Lennon once said he didn’t believe musicians created emotions in their listeners, but rather that the artist’s role was to shine a light into the depths of what each of us already possesses. In Tribute To, Yames does exactly this: turning inward the spotlight to illuminate all the beauty within. A portion of the proceeds of album sales go to supporting the Woodstock Farm Animal Sanctuary.