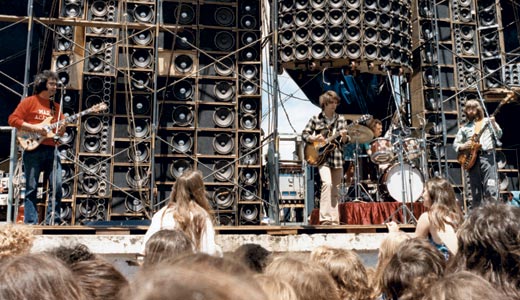 In June of 1974, The Grateful Dead were going to honor the end of my first year of law school at the University of Kentucky, and my impending 23rd birthday with a show at Freedom Hall.

I “got on the bus” during my senior year of high school, when the Dead played Bellarmine College on Dec. 7, 1968. Unlike The Doors, who had performed a perfunctory set on Halloween two months earlier, the Dead played to an enraptured audience for hours, taking us on a ride through dense improvisational music that soared and swirled.

The parking lot scene of vendors and hangers-on, which grew in the 1980s and 1990s, was nonexistent in 1974. Mickey Hart was on a lengthy sabbatical, and Ron “Pigpen” McKernan had passed away the previous year. Jerry Garcia, Phil Lesh, Bob Weir and Bill Kreutzmann were still on stage together, and had added keyboard player Keith Godchaux and his wife, singer Donna Jean.

The band members were dwarfed, however, by the incredibly huge speaker system. Dubbed “The Wall of Sound,” it allowed each musician to play though a separate set of speakers, and the clarity was astounding. Much of this concert, with lots of music from their prior gig in Des Moines two nights ago, has now been released as Road Trips, Vol. 2, No. 3: Wall of Sound, through Grateful Dead Productions.

As one who was not only there, but got a cassette of the remarkable second set a few years later and upgraded to a three-CD set a few years ago, it’s a bit disappointing that the entire concert is not officially released. However, the high points are well captured.

The 1974 Louisville show has been much admired by traders, especially for the second set improvising, and that segment of the music is the heart of the release. The swaying 14-minute samba “Eyes of the World” rolls into the melancholic beauty of “China Doll.”

Weir’s “Weather Report Suite” plays out for 16 minutes and evolves into a 9-minute jam which, in turn, evolves into a powerful 16-minute “The Other One,” then into a blues jam on the theme of “It’s a Sin,” closing out with a gorgeous “Stella Blue.” The encore, a spine-chilling 13-minute “Morning Dew,” is part of the third bonus disc, which intersperses music from Des Moines and Louisville.

“It was just phenomenal,” Donna Jean Godchaux (now Godchaux-MacKay) says of the Wall of Sound. Although she was the only woman and the only dedicated singer, she never felt like “the odd man out.”

Asked for any memorable moments about the tour, she replied: “During some of the time around the Wall of Sound, I was pregnant. My most vivid memory — you know how you hear that if you speak to your child, they hear you, whatever you do near them, they hear it? And here I was gestating a child, Zion, in front of the Wall of Sound. Everything went into him, and he’s ‘Mr. Music,’ a musician. His musical capability is very strong and his affinity with the Grateful Dead is profound. This was a part of my life that also affected my offspring in a way that a lot of people can’t say.

“We were in a unique time and situation that we’ll never see again. I’m so glad I got to be a part of it,” she said.

With the ’74 show being released, you can too.