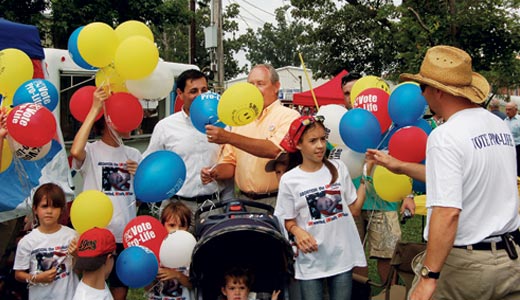 We’re sitting at one of the half-dozen red picnic tables, roughly dead-center at the 129th Fancy Farm Picnic, and the thick musk of barbequed pig permeates from nearly every pore of this place: our picnic table, our clothes — the trees, even. One would expect no less from the world’s largest one-day barbeque, which also has the distinction of being one of the nation’s weirdest political events and a typically atavistic Kentucky tradition.

To resist the barbeque here is to resist a Hawaiian lei, or to leave your sneakers on in a dojo; it’s just rude.

But then, rude is definitely in the atmosphere here as well: Fancy Farm is the only surviving “stump-style” exercise in ornery political oratory of its kind, where office-seekers could verbally joust, roast and abuse their opponents in the era before Twitter. The event has mutated very little over the years and remains a cartoonish spectacle of dumb behaviors and good-natured ribbing that seems oddly out of place in the 21st century.

Conventional Kentucky wisdom posits that Fancy Farm serves as an accurate bellwether for how the commonwealth-at-large regards those candidates who jump into the fray — candidates who exhibit all of the fervor, inane theatricality and faux-menace of a trash-talking professional wrestler. As you’d expect, the crowd responds in kind; booing, hooting and hollering are welcome.

Conventional wisdom also posited that this year’s Fancy Farm was to be a snoozer; all of the titans — Beshear, McConnell and Bunning — are in absentia, and, they claim, it’s not even an election year. But this misses the magical point of the picnic, which is to show up and be amazed.

My companion, Joe Sonka, has already devoured two pulled-pork sandwiches. We’re trying to figure out where Jerry Abramson ran off to (while waiting in the food line just moments earlier, we spotted him greasing palms with the rabble, a thin sheen of sweat glimmering across his forehead) when a middle-aged man wearing a white Rand Paul T-shirt hands me a trillion-dollar bill featuring Federal Reserve Chief Ben Bernanke’s grinning, bearded mug.

“How would you fellas like some free money?” he says.

The man, Jake Yeager, who seems like a reasonable if not badly misinformed individual, proceeds to discuss his disbelief regarding President Obama’s birth certificate (“It’s a forgery. There’s no birth certificate that looks like that.”), the coming of the Illuminati (“There’s a movement toward a New World Order … we’re already a police state.”) and how his wife knows “a lot more about these things than I do, really. I just wear the T-shirt, you know. You should really ask her.”

After a wide-ranging debate we amicably agree to disagree on virtually everything. I suspect that at any moment black helicopters will whisk Jake and his wife away for knowing too much. We politely flee the scene.

I then run into Jefferson County GOP Chairman Brad Cummings, whose anti-Jerry T-shirt was sported by more than a few picnic-goers, hanging out behind the stage with Larry Hausman, a Highlands-based Republican real-estate investor eyeing to capture John Yarmuth’s 3rd District seat. An avid free-marketer, Hausman seems poised to represent a slew of future “Capitalism Rulz!” GOP candidates who would argue the problems facing America aren’t the result of too much private influence, but rather a lack of it. Although his knowledge of a public health care option is obviously constrained by his party affiliation, Hausman’s pro-market rhetoric at least seems earnest, if not altogether incomplete.

Kentucky Secretary of State Trey Grayson and his coterie of sign-wielding McConnellites are to our right; Grayson is shaking hands and enjoying what appears to be the strongest showing of support at the picnic — with the exception of Rand Paul, whose numbers appear legion here if only because their dedication is more zealous than your run-of-the mill Republican. It appears the Grayson signs, by far the largest at the picnic, are designed to shield the candidate from something (Cameras? Sunlight?); he’s nestled by them, never moving without them, like an anglerfish accompanied by bioluminescent bacteria.

Speaking of deliberate movement, there’s still no further sign of our mayor, whose ability to become one with a sea of voting flesh is either more acute than reported, or he left early after having spoken to a quota of TV crews. In our efforts to track him down, an ambassador of Lexington lawyer Gatewood Galbraith’s campaign greets us instead: Old and tiny and wearing a “Hemp for Victory” button affixed to her yellow Galbraith-for-Governor shirt, Paula Willett has been a supporter of Galbraith for over a decade. She slaps a giant “G” sticker onto my chest.

“Got any pot back there?” Joe asks.

She laughs. “I’d rather have a pot smoker in Frankfort,” the Marshall County native continues, “than an alcoholic, or a gambling addict, or a womanizer. Do you know what I mean? At least Gatewood speaks his mind. All of these other people,” Willitt says, motioning with her cigarette-hand to the throngs behind me, “they’re fake. Every one of them. And the media are all their political whores.”

After another delightfully strange conversation — this time with Galbraith’s lieutenant governor/political consultant Dea Riley, who spoke of her media savvy (something a marijuana-advocate simply can’t have enough of in this state) and who went on full damage-control-alert mode when Joe, after having spoken with Gatewood about his views on abortion, asked if she was aware that her running mate advocated the electric chair for women who get abortions — I get a chance to speak with the decidedly more mainstream and better-looking Jack Conway, who finds himself in the middle of a strange and distant land, politically speaking.

[On a related note: Earlier in the day I asked Daniel Mongiardo’s campaign manager, Kim Geveden, whether it was smart to demonize Louisville in order to exploit the rural-urban divide for votes. “It’s not demonizing,” Geveden informed me, “that’s just your perception,” then launched into a spiel about how Jefferson County is a “great economic engine” that must be “well-oiled,” etc.]

Putting this to Conway, he smiles and shakes his head. “Their accounting is in line with Enron’s. We’ve raised more money than they did outside of Jefferson County. Meanwhile, these stereotypes they keep peddling are breaking down, and Kentucky is changing along with the rest of the nation. They want to make fun of where I went to school, where I’m from, but at some point we’re going to have to discuss the important problems facing all of us.”

How Kentucky is changing (if at all) remains to be seen. Ironically, Fancy Farm and the playful backwardness it encapsulates provide a stark contrast to Conway’s — and Abramson’s — hopes, ambitions and unifying rhetoric they’re employing to get the state behind them, even though Mongiardo’s “messaging” might be complicating things for Beshear’s new wingman. So despite all of the barbs traded on that stage last Saturday, the fact that Abramson was able to get in and out and shake a few hands without being dragged into the mud stands out as perhaps the picnic’s greatest political victory.

And that Conway wasn’t scalped. And that Grayson looked strong. Or that Paul and his supporters might be too odd, even for Kentucky.

Then again, there’s always next year.