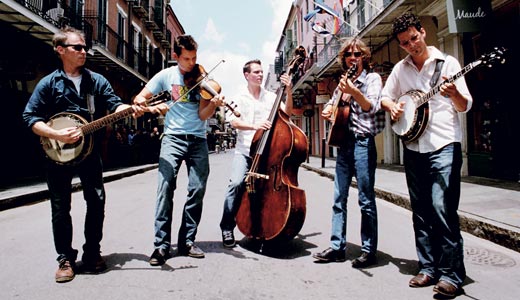 The Felice Brothers were halfway through their third song at last year’s Oktoberfest celebration in Lexington when the power supply unexpectedly gave out. From the shadows of the stage, where the likes of Todd Snider and Sam Bush looked on, the brothers high-fived each other, joking around about how that was the easiest money they had ever earned.

After the fact, James Felice, the band’s affable multi-instrumentalist, confided to LEO that this actually happened to them once before, during their raucous set at the 2008 Newport Folk Festival.

Accordingly, he knew just how to handle the situation. Following Felice’s lead, the rest of the boys grabbed an assortment of acoustic instruments (accordion, washboard, guitar, snare drum, etc.) and hopped offstage into the massive crowd, whereupon they stomped and screamed and generally brought the house down without the slightest need for amplification.

Beyond all the Basement Tapes hype, the Felice Brothers really do personify the spirit of a bygone era in American music. And they most certainly know their way around a hootenanny.

At 27, Justin Townes Earle is an interesting enough character with exactly the right kind of hard-earned experience to step into the spotlight.

Both of his recent recordings for the insurgent Bloodshot label boast tasteful production, thoughtful lyrics and a solid assortment of Americana music.

Of course, it isn’t really shocking that folk, old-school country, hillbilly blues and early rock ’n’ roll inform this rising star. Nor is it surprising that he almost did himself in with substance abuse. He is, after all, the son of hardcore troubadour Steve Earle.

Immersed in the blues at a young age, Earle fondly recalls the days when he would enlist his famous father to drive him from Nashville up to central Kentucky to learn licks from two masters who were then based in the region (Frank Schaap and the late Joey Broughman).

Best known for as Gillian Welch’s longtime musical partner, David Rawlings has flown under the radar for much of his career.

His “machine” is basically the Welch/Rawlings old-timey duo, albeit with their usual roles reversed.

Along the way, OCMS have fashioned their own brand of string band music and acquired a loyal following of fans and friends.

Although they were immediately embraced by traditionalists, Secor stresses one distinction worth considering. “Since our inception, we’ve never seen ourselves as a bluegrass unit,” he tells LEO. “More like a rock band with claw-hammer banjo skills.”

That might account for the group’s popularity at Bonnaroo and strong Soundscan numbers. A careful listen to the OCMS catalog reveals that they’re sufficiently well versed in the rock ’n’ roll lifestyle. Though, in part, the illicit references that float around the OCMS repertoire are merely the continuation of a long trend in folk music.

“People have been singing about shooting up and shooting their spouses for centuries,” Secor wryly notes, but such allusions do demonstrate the band’s genuine affinity with the common man.

“I feel like ‘Methamphetamine,’ for instance, deals with social injustice,” Secor says. “It is about all of those numbing devices that take folks away from the harsh reality of life in the places, some of them in Kentucky, where drinking water is blurry muck, and the schools are terrible, and the kids are totally full of inopportunity. The places where you can’t even grow a garden in your backyard, and there’s just nothing to do. Obviously, any time you have an epidemic, there’s so much more involved than the person who’s got the flame to the spoon.”
Over 10 years, five studio albums, a forthcoming DVD and countless concerts, the populist appeal of Secor and his bandmates has certainly served them well.

It seems fitting that likeminded cohorts and musical misfits Felice Brothers, Earle and The Dave Rawlings Machine will share the stage — with Old Crow wrapping it all up — for Wednesday’s Big Surprise concert on the Great Lawn.

But take note, this is not your standard four-act bill. Instead, this seldom-seen format will be more of a rolling revue in which all of the performers will interact and collaborate with one another for two long sets.

Homegrown promotion company Production Simple hopes to use the Great Lawn at least once each summer for throwdowns like these. Last year, they were kind enough to bring us My Morning Jacket. Next year, U2?