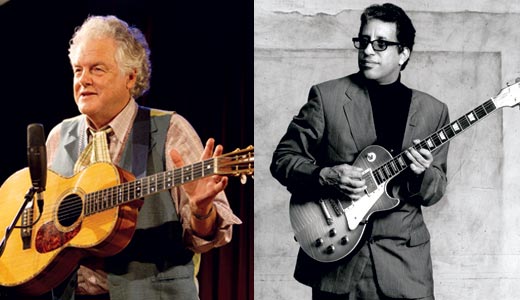 When Peter Rowan left Bill Monroe’s band to start a bluegrass group of his own, he wrote letters to a bunch of Nashville labels. The responses all ended the same way: “Dear Mr. Rowan, We are not looking for bluegrass at this time.”

In 1967, Rowan and David Grisman formed Earth Opera, “an exercise in slow tempos.” The group opened for The Doors and released two albums before breaking up in 1969. “If you listen to Earth Opera, it was anti-bluegrass, a way to explore tones in different ways.”

Over time, Rowan has returned to bluegrass, last week completing demos of four songs with banjo player Keith Little, Jody Stecker on mandolin and bassist Paul Knight. It’s the first bluegrass group he’s had since his 1970s outfit, Old and In the Way.

“Bluegrass is a curious thing,” he says. “It’s a classical music in that it has a classic repertoire, and it just happens that we were growing up in a time when we had to learn the classical repertoire. People say I’ve done projects that are progressive, but it’s really just an attempt to play bluegrass.”

In 2007, Rowan and guitarist and Bluegrass Alliance alum Tony Rice recorded Quartet, a bald-faced opportunity for two virtuosos to stretch out. “It’s the longest band I’ve ever been in,” Rowan says, only half-joking. “My songs gave him a chance to explore more open-sounding structures.”

Chris Cain’s blues education started with his father blasting Muddy Waters while doing house work, but the youngster took it from there. The self-taught guitarist was a quick study even at San Jose City College, where he taught other students jazz improvisation before he graduated. He branched out to piano, alto and tenor saxophone, which has contributed to his mix of jazz, gospel and blues. We couldn’t find a newer album than 2003’s Hall of Shame, so he’s about due, but the catalog is at chriscain.cc. Cain plays Stevie Ray’s Blues Bar (230 E. Main St., 582-9945) on Tuesday, Sept. 1. Doors open at 6 p.m. Showtime is 7:30 p.m. Admission is $15.

A favorite of the late Hunter S. Thompson, Michael Hurtt and his Haunted Hearts bring their New Orleans-style stomp at 10 p.m. Friday, Aug. 28 at Third Street Dive (440 S. Third St., 643-1218, myspace.com/thirdstreetdive). Cover is $5. Their new album, Come Back to Louisiana, is out now, boasting a rock-a-bayou style … like everything else in Louisiana: eclectic. Trackage at myspace.com/hauntedhearts.