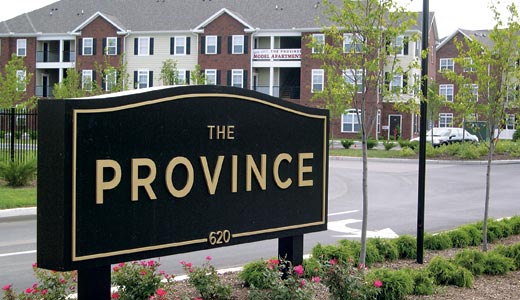 Standing in the heart of The Province — the University of Louisville’s largest, latest mega dormitory — the illusion is complete. Once a barren tract of industrial wasteland bounded by Seventh Street to the west and the CSX train tracks to the east, there is now the gentle sound of cascading water: A giant fountain rises up and crashes into a manmade “pond” below, cocooned by a dozen or so structures that will serve as the next phase of the university’s transformation from lowly “commuter college” to a premier research institution with a dedicated campus community.

“An incredible transformation has taken place on this property in a year,” says James Ramsey, U of L president, addressing a gaggle of reporters, students and various public/private/academic intelligentsia during a recent ribbon-cutting ceremony for the complex. “You know what this piece of land looked like. It sure doesn’t look like the dorm I lived in when I went to school.”

Ramsey is correct: Aside from the central geyser, there’s a massive commons house replete with a game room fitted with the latest home consumer electronics[1], a state-of-the-art fitness room and a wood-paneled media room chock-full of plush leather chairs, framed movie posters and a high-definition flatscreen television worth at least one year’s in-state tuition. There’s also a pool, beside which the ribbon cutting is slated to commence.

The combined effect is more reminiscent of an upscale condo club than a place for students to call home.

But then, this is a home designed to attract, in Ramsey’s words, “the best students,” and by 2020 he plans to have 32 percent of the student body living on campus, of which only 9 percent does currently. With The Province filled, that figure jumps to 24 percent. “Historically,” he says, “the commuter aspect has kept engagement low … The key to our students’ success is their engagement.”

In this case, engagement is a fancy word for a kind of multiplier effect that occurs on college campuses whose strong dorm presence and resultant student foot traffic generate cultural, economic and communal activity. Prior to the last decade or so, engagement wasn’t something U of L had been much interested in, opting instead to require its class-takers to drive to and fro between periods and allow its Belknap campus to become an oasis among a desert of paved concrete and derelict buildings.

The Postsecondary Education Improvement Act of 1997 helped change that, mandating that the university become a top-20 research school by 2020 utilizing whatever means possible. Additionally, it was discovered that graduation and retention rates can be more than doubled by providing a cohesive campus life that isn’t centered around the automobile; where students can walk to class and add to the vibrancy of the nearby community rather than commuting as strangers in a strange, poorly-zoned land.

In other words, the better the atmosphere on campus, the greater the likelihood of increasing retention and, consequently, the number of higher-quality students whom won’t run away and graduate elsewhere.

“I think it’s a wonderful, positive aspect for the Park Hill community as well,” says Tom Jackson, vice president for U of L’s student affairs. “It’s helped revitalize an area that has been neglected by bringing in more activity and, eventually, more businesses. And it’s certainly much better than the empty industrial site that was there before — how was that serving the needs of the community?”

Prior to the coming of The Province and the neighboring, still-under construction Bellamy student apartments, capital investment in the area hovered around $300,000. Now that figure is over $60 million — and likely to climb.

Jackson adds that these housing projects, when combined with the off-campus students residing in neighboring Old Louisville, will “change the profile of campus life completely.”

“That’s more than 4,000 students within a 10-minute walk to campus,” Jackson says, “and they can easily come back for student activities on campus as opposed to having to get in a car and drive there.” Jackson also says there are plans to build two similar complexes along Cardinal Boulevard.

Once these projects are at full occupancy, thousands of students are anticipated to transplant to the area, so it’s not hard to imagine the transformative effects that will follow in their wake: new businesses, a human scale, a burgeoning sense of community and the vibrancy that can only come with the distant roar of illegal keg parties.

Aside from increasing the raw number of beds on and directly adjacent to campus, however, U of L has also undertaken several infrastructure improvements — some aesthetic, others functional — that are part in parcel of the school’s newfound embrace of traditional collegiate design.

A drive down South Third Street reveals the newly completed, $1.2 million oval walkway/entrance emblazoned with the university’s seal. Across the street, Stansbury Park is expected to undergo a $12.5 million redesign that will re-embrace its Olmsted roots, vastly expand its recreational and transportation capabilities, and usher in a bevy of street-level retail. The Eastern Parkway overpass will get a redesign as well, reducing the number of extraneous car lanes and replacing them with bike lanes and pedestrian rights-of-way. Then there’s the Masterson’s catering property, which will soon be home to a multi-story mixed-used development, adding density and walkability to a campus-edge currently devoid of such.

All of this — plus the creation of a new multi-million dollar renewable energies classroom and a major expansion of the Speed Art Museum — implies that the university is serious about building up, not out.

Ojay Oleka, a fifth-year student and U of L student body president, laments that he’ll probably never get a chance to live in one of the new units.

“I’ve got an apartment on Third Street,” he says, “but these are nice.”

Oleka remembers a time not long ago when these projects were still whispers, and the campus retained the static appearance and function that has been its heritage until now.

“In five short years, there are nearly twice as many beds (on campus),” he says. “It’s been very reassuring to see the university making housing a priority. It lends a far better feel to the campus, and that, I think, lends a better quality of life as well.”

The kids on the bus