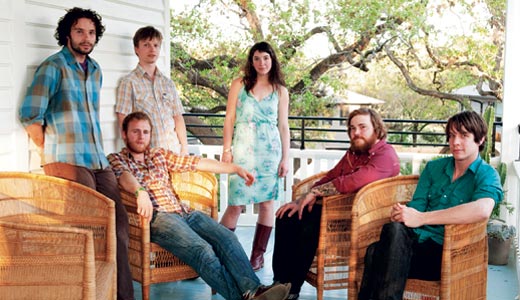 For Oregon outfit Blind Pilot, it all started with a couple of bikes.

Singer-guitarist Israel Nebeker and drummer Ryan Dobrowski, the band’s founding members, got going with a bike tour down the west coast in 2007. That trip ended due to a theft of their transportation in front of San Francisco’s Museum of Modern Art, but another kicked up in 2008 with a couple of new members joining the fray as the band made more than two dozen stops along the coast.

The digs have gotten slightly better due to the success of their debut album, 3 Rounds and a Sound, which rose to No. 13 on Billboard’s Digital Albums chart. But despite European tours alongside Counting Crows and The Hold Steady, a spot on this year’s Lollapalooza lineup and a current tour behind The Decemberists, Nebeker still misses those days on the bike.

“When we did the bike tours, my mind and body got used to putting out tons of energy everyday,” Nebeker says via phone. “Now we’re in this giant whale of a van with our whole band and all of our equipment in there. Everyone gets along, but you can’t get that much energy out when you’re sitting in the van all day.”

If Nebeker has van ennui, he can take comfort in knowing he is touring behind a badass record. 3 Rounds and a Sound is passionate and beautifully eccentric, one of those albums you immediately want to turn someone onto. It probably reminds you of something by The Shins or Fruit Bats, but Nebeker’s achingly personal lyrics breathe new life into the spacey, college radio-friendly realm.

How personal? The album’s true gem is the title track, where Nebeker writes with bare-naked honesty about trust and intimacy in a relationship gone to the dogs. The words you know me recur throughout as lines like they’re playing our song … I hope they get it right … before we get it wrong fall like daggers on an already broken heart.

“I was at my cousin’s wedding, and he asked me to play he and his wife’s song,” Nebeker says. “It made me want to write from that perspective of someone later in life who wishes they had a song. It was really honest and I thought it might be too revealing. But I put it on this record that I thought only a few people in Portland would hear.”

Poor dude. After the tour with the Decemberists, Nebeker says the band will do its own headlining tour in the fall and plans to go into the studio next year. Other than the van, success has had few dark moments.

“This success has been pretty surreal,” Nebeker says. “I keep waiting to stop being stoked about playing all of these shows where people already know who we are and have heard our record.”

The Killers @ Horseshoe
These international hitmakers haven’t let up since their debut, Hot Fuss, made them stars back in 2004. Kudos if you were able to get “Somebody Told Me” out of your head. Then again, it was probably replaced by “Mr. Brightside,” “When We Were Young,” “Human” or another member of the hit parade.

They’re touring behind their latest, Day and Age, and grace the stage at Horseshoe as part of the casino’s Summer Concert Series on Aug. 8. They will be accompanied by indie rock up-and-comers Ra Ra Riot, whose album The Rhumb Line is a treat in itself.