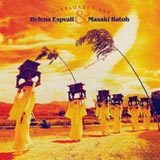 Dimension, depth and mood are pervasive on Overloaded Ark, another magical, mystical vessel piloted by Helena Espvall and Masaki Batoh. Those who caught them at Terrastock are fully aware of the duo’s capabilities at overlaying ancient styles with contemporary mentality, and there’s no deviating from the program here.

The title track builds itself first atop a sensual, tribal backdrop, then disrupts with shards of noise, while “Until Tomorrow” and “Sham No Umi,” a long-brewing Batoh composition from the late ’90s, are somber meditations likely to instill thousand-yard stares.

With an impressive instrumental array composed of crumhorn, darbuka and a 16th-century wind instrument called a rauschpfeife (Google it), Ark could’ve devolved into a throw-it-all-against-the-wall historical lesson. It isn’t — the accompaniment contributes to an overall eclectic, compelling cinema.