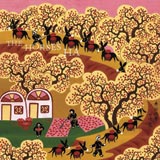 Ex-Eleventh Dream Day and current Freakwater vocalist Janet Beveridge Bean heads an eclectic roster of Chicago-based musicians, and their debut is rather surprising. While Freakwater tend to play it safe within the established parameters of alt-country, The Horse’s Ha are moody and sprawling. The vocal interplay between Bean’s silky melodies and James Elkington’s smoky, Lee Hazlewood-evocative croon is reminiscent of Mark Lanegan and Isobelle Campbell, with rich lyrical imagery to boot.

While some aspects seem unremarkable, The Horse’s Ha hit their stride when incorporating jazz, Paisley Underground jangle, Anglo folk and other standards far from average insurgent country. The driving, ornate “Asleep in a Waterfall” and freewheeling, orchestral, Califone-esque “Liberation” showcase an ingenuity not found in much modern folk. But it’s the fluid, bombastic English folk of “The Piss Choir” where The Horse’s Ha carve their own niche and make Of The Cathmawr Yards worth a listen.