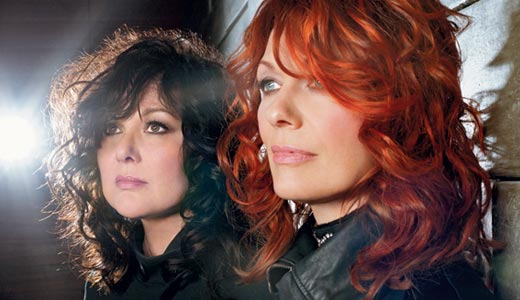 Nancy Wilson: Heart is in the studio working on an as-yet-untitled proper album.

Nobody puts Nancy Wilson in a corner. But at the “Elizabethtown” premiere after-party at the Brown Theatre a few years ago, there she was, back against the wall, while the Kentucky bluebloods clamored after her husband, director Cameron Crowe. I marched over there, extended my clammy, shaky hand and uttered something along the lines of, “Oh my god, you are Nancy Wilson! I love Heart! You are my hero.” She smiled and seemed shy about being recognized, content to lay low in her husband’s shadow. We had a brief conversation about My Morning Jacket, whom she picked to include on the film’s soundtrack.

In a recent phone conversation, Heart’s lead guitarist seemed just as humble and content driving to a recording studio in L.A. She talked about everything from the new record to Journey sans Steve Perry to Chilean sea bass.

LEO: I hear Heart is recording a new album.
NW: Yep, we’re in the studio right now working with producer Ben Mink, who Ann did her last solo album with, Hope & Glory. (He’s) just a great all-around musician — plays fiddle, plays guitar … he can actually play anything with strings on it.

LEO: What kind of sound are you going for?
NW: People-in-the-room-playing-at-the-same-time kind of vibe, and not so produced. Undigital — much more human.

LEO: Who are you listening to now?
NW: I’ve been way into a couple Snow Patrol albums. Way into Sigur Ros. I’m into the new Bob Dylan album — Together Through Life — it’s with a Zydeco band he hooked up with — awesome, rootsy stuff. Love the Allison Kraus/Robert Plant album. You know they’re making another one? She actually came to visit us at Horseshoe before the show. I heard a little bit of the new Alice in Chains album … it’s going to be amazing. I think it comes out in September.

LEO: Which Heart song does the audience expect, but you (sometimes) get tired of?
NW: We have a lot of different choices to go from, so if we catch ourselves feeling tired of anything, we change. We change the setlist or change the way we’re playing it. On “Magic Man,” we just re-upped with a huge electric sound. It’s more like a metal song now.

You know, we wrote those songs and we believe them. It’s like we’re not doing other people’s music, we’re doing our music. When you see the excitement and support from the audience, it’s real easy not to feel like that. It’s so easy to love your job and be like, “Wow, I get to be in a rock band! I get to play ‘Magic Man’!” “Barracuda” is always fun, no matter what. That’s riding a horse; it’s a beautiful thing.

LEO: You’ve been involved with the film world, been onstage or otherwise collaborated with great musicians … is there any “dream collaboration” you’d be interested in?
NW: Probably Tom Petty. I’m just a super Tom Petty fan, more so lately than ever. I’ve been rediscovering his “lost albums.” Wildflowers is all-time for me — the song and the album. So yeah, I’d love to have the chance to play guitar with him or sing a harmony part somewhere.

LEO: What made you pair up with Journey on this tour?
NW: Last summer they extended an invitation to play with them and Cheap Trick. It was a really nice combo with all three bands. We did excellent business last summer and had a great time — everyone was cool, nice, no drama. And they asked us back this summer, and we said, “Why not?”

LEO: What do you think of their new singer, Arnel Pineda?
NW: He’s the nicest guy you’ll ever meet. We had our doubts going in, but he brings so much enthusiasm. You know, those are not easy shoes to fill (those of former lead singer Steve Perry). And he brought it every night. We really fell in love with him, and I know the audiences did too. It’s a hard thing to do. Their album sounds amazing. He’s also his own guy, bringing his own character into the band — it’s a beautiful thing to witness.

LEO: Playing guitar next to your sister for more than 30 years … how do you think your career would have been different if it wasn’t your sister who was beside you?
NW: That’s a question I ask myself many times. I’m lucky enough to be standing up there on a stage with her and her voice. I wasn’t sure I was going to join her band — she was sure I was going to join her band. I stalled out for a couple of years and did university before I joined, and did some solo acoustic stuff. And I could have pictured myself doing always doing that — more like in the Sheryl Crow vain. But I think I made the right choice.

LEO: Is it easier getting along with her now or when you first started?
NW: It was really easy at the very beginning. But when the Tinseltown party came along, it got harder. We had a lot of ethical and moral decision-making to do as leaders of the band. We didn’t always have the same instincts on that. We had a couple icy moments where we had to compromise. But other than that, I’d say these days it’s spectacular. It’s really like chasing stolen watermelon, because it’s a little bit sweeter — like you’re getting away with something that people don’t get away with anymore. It’s a sweet, sweet thing.

LEO: Besides barracuda, what’s your favorite type of fish?
NW: Type of fish? (Laughs) Well, let’s see. If you’re grilling, it’d be lobster. If you’re cooking on the stovetop, it’d be Chilean sea bass with a papayan Szechuan flair.