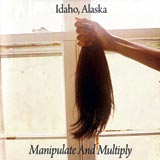 The 52-second opening track of Idaho, Alaska’s Manipulate And Multiply — a grinding, lyric-less and feedback-driven arrangement — teases you into thinking that the Lexington-based foursome are following up their 2007 debut with a heavier, darker sound. On “In the Desert,” lead singer Chris Soulis croons a nightmarish sequence, before the antipathy underneath his low tone erupts into shrieks about when silence is the sound. But the band is not just appealing to the gloomy. A later track gleefully proclaims feelings of being brand new. Others, such as “Monterey,” are downright spry. Those contrasting feelings manifest themselves often in the form of slow, low-sung verses that precede bellowing choruses. The end result is a sound akin to that of Modest Mouse or The Eels, mixed with a temper sometimes absent among their indie brethren.