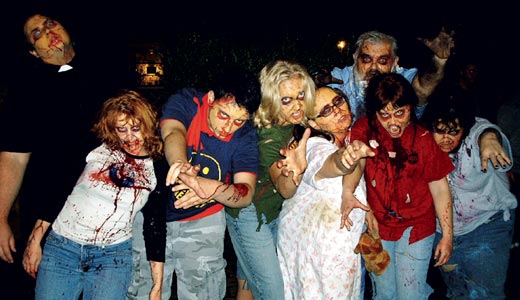 It’s hard not to feel uncomfortable when you’re sitting in the dark and a 20-something made up to look like one of the undead is lumbering less than a foot away from you. I knew I was in the thick of Finnigan Productions’ theatrical double feature “Wrong/Zombie,” but after hearing the flesh-craving moans coming out of these faux cannibals, I imagined Zombieland would probably look a bit like this. I wish the rest of the production would have made this much of an impression.

Don’t get me wrong, though: There is a lot of good stuff here. “Wrong,” first on the bill, is the real treat. Composed of a series of sketches by Indicators improviser Sarah East, the jokes don’t always hit, but when they do, they’re pretty special. Evening highlights: a feuding couple break up and just as quickly get back together after a round of interpretive dance to Celine Dion’s “It’s All Coming Back”; a group of Muslim jihadists have a slumber party and threaten each other with bombs strapped to their chests; and a toy company meeting where nervous executives try to come up with the perfect doll, exhausting each idea before finally arriving at the perfect one: Ralph the Closet Bulimic.

East fails to avoid a couple of duds, though. “Grandma Won’t Die” is an uninspired stumbling point featuring a couple of BFFs visiting a recently deceased grandmother at a mortuary and, you guessed it, she won’t die. Despite schlock like this, East clearly has the goods as a writer. “Confession” features a slightly unstable woman narrating anxiety-ridden episodes of the past as they play out right beside her. The sketch starts out bizarrely funny but turns into something more thoughtful about people’s insecurity. East should think about extending this sketch into a one-woman show; it’s a strong concept.

Maybe I assumed too much, but I figured “Zombie” would be just as on-the-nose comedic as “Wrong.” Post-“Shaun of the Dead,” any production with zombies feels like it could reasonably go that way. Instead, we get the flipside: a hella-earnest homage to George Romero’s “Night of the Living Dead,” where a family tries to wait out a zombie attack on a remote farm and slowly starts to come apart at the seams.

There are nice bits of humor sprinkled in — the mother cutting off her finger to feed her chained-up zombie son is one twisted, funny example. But for the most part, everyone plays it straight, and there isn’t anything here that you can’t find in the Horror section at Blockbuster. Kudos to the actors for giving their all (Susan Linville, as the aforementioned finger-severing mom, is an unhinged gem), but writer Brian Walker should have found a different take on the material. Full-on comedy might not have been the best choice, but judging from the titters of inappropriate laughter throughout the performance, the audience was ready to be amused.