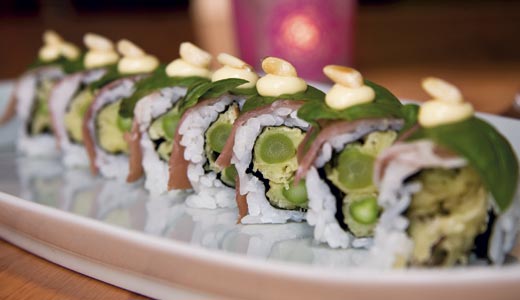 “I just can’t do sushi,” my Facebook friend Suzie in Arkansas posted. “It’s the redneck in me.”

Maybe. But even the most ardent sushi-hater could be rehabilitated at Dragon King’s Daughter, where Toki Masabuchi puts an international twist on the creative sushi delights that have built her a loyal following at Maido Essential Japanese in Clifton.

Take the “Italian Picnic” ($10). There’s no fish in this delight, which features pencil-thin asparagus, tempura-battered and fried, tucked into a sushi roll topped not with seafood but Italian prosciutto, fresh basil leaves and a dab of Japanese mayo topped with a few toasted pine nuts. Is it Japanese? Is it Italian? It’s both — and it is delicious.

Masabuchi, who continues to work her culinary magic at Maido, too, recently took over the Bardstown Road quarters left vacant by the abrupt departure of Karma Café.

In contrast with Maido, which replicates an Osaka “izakaya” bar with its small plates, beer and sake, Dragon King’s Daughter melds a world of tastes into a wacky but appealing fusion. Fancy a sashimi pizza? You can get it here, or a variety of sushi tacos. There’s a wide choice of sushi rolls, of course, and soups, salads and snacks with their roots in Japan and their spirit international. The bar offers quality artisanal and Japanese beers, sake and shochu, Japanese distilled barley liquor.

New management has cleaned up the old Karma Café and touched up the paint, but the scene remains familiar: Two adjacent Bardstown Road storefronts consolidated into one, a short flight of steps linking them. Walls are bold colors of guacamole, sky blue and lemon ice, hung with paintings-for-sale by local artists. Shiny, light-wood tables, quarry tile and what appear to be the original wood floors under shiny protective polyurethane make for a hard-edged, noisy scene.

We’ve been in a couple of times already — once with a large group of LouisvilleHotBytes foodies and later lunch for two — and been delighted with just about everything we’ve tried.

Karaage chicken wings ($7) are marinated in ginger, garlic and soy, then breaded in panko crumbs and fried dark and crisp. Served with a fusion “wasabi-ranch” dressing, they’re a far cry from Buffalo but as good a wing as I ever ate. Zaru Soba salad ($3), a traditional Japanese summer treat, features cold soba (buckwheat noodles) with julienne cucumbers, carrots, red bell peppers and sesame seeds tossed in a wasabi mayo.

The sashimi salad ($8 for a half portion) is a work of edible art, organic spring lettuce mix artfully composed with raw ahi tuna, salmon and white tuna, red onions and sliced avocado, squirted with a checkerboard pattern of tamari-sesame sauce and fried garlic chips. Another favorite sushi roll, Citrus Heat ($11) offers an unexpected mix of flavors with diced red tuna, jalapeños and spicy sauce within the roll, roasted red peppers and paper-thin slices of lime on top.

Crispy fried vegetable-stuffed gyoza (pot-stickers, $4) were displayed on a pretty plate design of green spinach vinaigrette and golden spicy mustard. Stir-fry veggie tacos ($5 for three) were made open-face on small, soft corn tortillas, taqueria style. The pizzas ($8 to $12) are served on oval, puffy flatbreads, raw-fish ingredients added after cooking.
Our share for two after eating way too much at the group lunch was $39 plus 20 percent tip. Another day we sampled the all-you-can-eat sushi lunch buffet, a grand-opening deal for $15. Sushi rolls are placed over ice and are quickly replenished. Everything was good, but items aren’t labeled, making it difficult to identify favorites. This lunch, with ice water, was $31.80 for two, plus tip.

Service was friendly but will likely gain confidence with a little more time on the ground. Dragon King’s Daughter is very new, but it looks like a keeper.