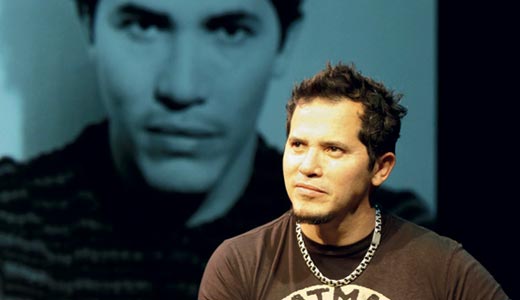 Johnny Legs is back. The award-winning writer/performer of the hit one-man shows “Freak” and “Sexaholix … A Love Story” is launching his latest laff riot, “John Leguizamo LIVE!,” at Actors Theatre Aug. 7.

Leguizamo may be known to most as a film and TV actor, having appeared in over 80 projects with titles like “Moulin Rouge!,” “Summer of Sam” and “Super Mario Bros.” (the effing masterpiece). But his unique brand of standup/theater has become his trademark, with “Freak” earning him Tony and Emmy awards and “Sexaholix” earning him another Tony nod. Both shows also led to special broadcasts on HBO as well as extensive touring.

“Live!” will focus more on the actor’s career as he recounts stories of the outrageous ’80s NYC theater scene, as well as the dish on some of Hollywood’s biggest stars. LEO Weekly recently caught up with Leguizamo via phone to chat about the new show, career ambitions and the truth behind some of his most hilarious anecdotes.

LEO: So this is your first one-man show since “Sexaholix.” How did this one come to be?
John Leguizamo: I started writing it right after “Sexaholix.” I really wanted to do something about my career. The fights. The battles. The craziness. Behind every movie is a great story, and with this show, you get to hear them all. And they aren’t those fluff stories that celebrities like to tell, either.

LEO: When you write a new one-man act, do you approach it as its own individual thing, or do you try to keep things in continuity with your other stuff?
JL: I approach things individually but I also look at it as a trilogy sort of thing. “Freak” was about my dad and my life around the time I was 18. “Sexaholix” looked at things around the time I got married. This one is about my career.

LEO: Your act is really a unique blend of standup and theater. Do you take it as more one than the other?
JL: My shows are really a hybrid of a lot of things, but I really think of what I do more as theater. I came up in the avant garde theater scene in New York with people like Whoopi Goldberg and Eric Bogosian, who were always trying new things and experimenting. I carry each of them with me when I go onstage, and it’s great to give them a shout out. These shows really are the most personal thing you can do though. You get to see the best of me and the worst of me.

LEO: Do you have any favorite bits in your act? Anything that, looking back, you just have to say “shit, that’s funny?”
JL: I go on YouTube every now and again and check out some old stuff. The bit about breaking the antenna off my father’s television in “Freak” was pretty insane. It was amazing that that actually happened and I was able to turn it into something that really happened.

LEO: That really happened? What about the stuff in “Sexaholix” about helping your grandfather go to the bathroom when you’re in your 20s?
JL: Also really happened. It was pretty weird.