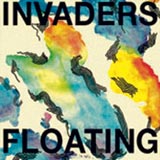 Invaders are much more than a fuzzed-out version of The Merediths, but that’s the starting point. Joe Meredith wants to plug us into the dream-space of someone who’s reacting to his new band’s sound, as opposed to simply giving us the tunes with an aural sauce of distortion and echo. Engineer Kevin Ratterman at The Funeral Home no doubt had a hand in making sure that some sounds gloriously head off to other galaxies, while others fly in blue skies with low turbulence. The guitar interplay is understated but effective, and Matt Filip and J.C. Denison know when to be a traditional rhythm section and when to independently flay the melodies. The foursome triumph effortlessly when they twist riffs on tight numbers (“The Flu”). Meredith’s vocals are at a mixed-down distance throughout, and the set might’ve been even better if he’d interspersed clearer singing. Also out of balance are the moments that default into post-shoegaze drone. But the 11 tracks add up to a grab-worthy debut with many distinct, intriguing, noisy charms. Invaders play Aug. 7 at Glassworks Rooftop with D. Rider, Buffalo Bill and Ben Purdom. The all-ages show starts at 8 p.m. $7.