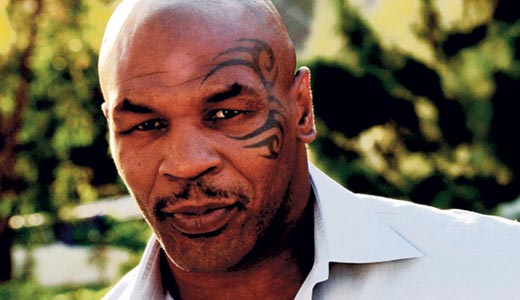 Emancipate yourselves from mental slavery / None but ourselves can free our minds. —Bob Marley, “Redemption Song”

Redemption is perhaps the most enduring narrative of the great American drama. A culture that places so much value in the worship of its heroes will inevitably play a part in those heroes’ demise, because each hero is also a human being whose faults and mishaps unfold across a screen and along a continuum most of us would rather never contemplate for ourselves. Equally, we — the culture — return them to glory.

The story of Mike Tyson — like the stories of Jesus, the Clintons, Jack Bauer and Michael Vick — is itself an American parable, finally brought full circle in the sympathetic documentary that bears his surname. Director James Toback, a former journalist who has made nine films, assembled his doc from extensive interviews with the former heavyweight champion, who serves as both the film’s narrator and its moral center.

Tyson’s story is familiar: a poor kid from a hardscrabble Brooklyn neighborhood who leaves a life destined for petty crime and drug abuse to train with the legendary Cus D’Amato and become a sporting superhero before he could legally drink a beer.

The revelations in “Tyson” are profound doses of humanity, and they function as a sort of swan song for the maligned boxer. He suffered a lifelong inferiority complex and turned to boxing as a way to conquer an ingrained fear of those he perceived as superior, both physically and otherwise. Tyson says he never had a sense of identity; instead, he cherry-picked qualities from “great men” — like Muhammad Ali — ignoring in the process the duality of every human: Even great people do bad things.

We are all familiar with his twin downfalls, both of which are dutifully addressed in the film. In 1992, he was convicted of raping Desiree Washington and spent three years in an Indiana prison. Instead of returning triumphantly to boxing, a la Ali, Tyson emerged paranoid and overly emotional. He fell to shame once more, biting Evander Holyfield’s ear during a primetime fight, an act that not only disqualified him from his best shot at regaining the title belt, but which solidified in the public consciousness that he was an insane man. His career would never recover.

Sports fans and animal activists are rolling around the notion of redemption now vis-a-vis Michael Vick, the NFL quarterback who served 23 months in prison for hosting an illegal dogfighting operation. It’s a quandary for a society that seems to value punishment over rehabilitation. Every time a public figure emerges from a fall with something decent to say, looking for a second chance, we confront the paradox that someone so good could have done something so bad. But that construct fails us dramatically; we know by experience that humanity is, in essence, a series of strange contradictions strung together loosely by the sense of self we cultivate for presentation to those around us. Most of us are able to hide our contradictions enough to get by, to seem relatively normal. Most of us never face the difficult prospect of a second chance.