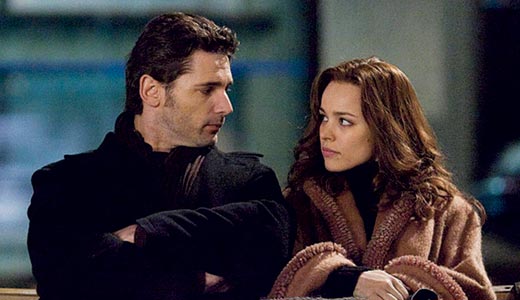 “OK, so ‘The Notebook’ involved a little time travel,” I rationalized. “You know, flashbacks, flash forwards … that’s kinda like cinematic time travel, isn’t it?” While the trailer for “The Time Traveler’s Wife” may scream “The Notebook, Volume Two,” and while you may try to convince yourself that this film is the second coming of that bittersweet film of a few years ago, this story, based on the book by Audrey Niffenegger, is far from it. It’s also far from a decent movie.

Perhaps it was my fault going in. You bring expectations to the table and you’re almost always going to be disappointed. But I trusted McAdams (“Mean Girls,” “Wedding Crashers”). And she’s about the best thing this film has going for it, unfortunately. Co-star Eric Bana (“Hulk”) seemed like he took this role to score voiceover work in commercials — he appeared as confused as the audience with all this time-travel nonsense, but damn, the man can inflect like no other. Morgan Freeman should be shaking in his boots.

So here’s the convoluted premise. Henry has a genetic disorder that causes him to time travel when he gets stressed or drinks alcohol. He jumps to the future, hangs out in the past and tries to forge real relationships in the present. There’s no telling how long he’ll be gone when he “flashes,” and there really is no purpose to his traveling. At least the guys in “Quantum Leap” and “Voyagers” had a mission — they could change history, stop bad things from happening and relive historical moments. This poor schmuck doesn’t do anything but run from authorities (because he always shows up naked — clothes and jewelry can’t jump through time, duh) and win lotteries (he gives his wife the winning numbers in a $5 million pot so she can focus on her painting instead of worrying about day-to-day troubles like having a job, providing for her family or dealing with a disappearing spouse).

Sometimes he will show up in the present as an older guy, sometimes much younger. And sometimes two versions of him show up at the same time, which is how wife Clare manages to get pregnant after he gets a vasectomy (who’d want to spawn a time-traveling rugrat anyway?). She jumps out of bed with Present Henry to meet up with Younger Henry, and they shag in a car.

But back to the gist of the story — turns out Henry and Clare have known each other since she was a tween and found him naked in the woods. Kinda creepy, but just go with it. So he flashes back every few months as she ages into womanhood, and she always leaves him a stylish sweater vest and a pair of her dad’s shoes. The fated lovers finally meet in the present at a library in Chicago, and from there they start a relationship and strive to live a life as normal as possible when your husband disappears for days, weeks … sometimes months at a time.

Is anyone still with me? Yeah, me neither. Wanna go rent “The Notebook”?