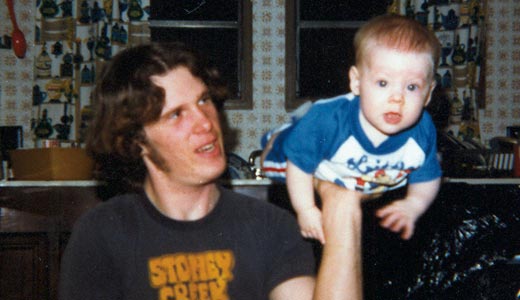 Bruce Parsons and his father

Something that will strike you about Pikeville, Ky., native Bruce Parsons’s short documentary, “I Know You,” is that it doesn’t seem like a documentary. It seems like a mystery. It’s about a universal, almost prosaic subject — his rekindled relationships with his father and grandfather — but it’s given to the viewer in a purposely disjointed way, jumping around in time and place and asking more questions than it can ever answer.

Parsons, who spoke to me by phone, explained that he edited the film exactly as he received it: a set of memories, photos and home video footage that fit together, but not easily.

The result is a film that is both smart and poetic. And I found that it gave me something new to think about with every viewing.

“My idea of a short film is really a sketch,” Parsons said. “It’s like what Wendell Berry says about writing an essay. When he gets to the end, he doesn’t always even agree with himself.”

We talked about his family, whom he can discuss with distance and honesty, like a director can discuss a cast of characters or a psychologist can a patient. Attaining that distance was a conscious decision he’d made in the editing process. Parsons was spending time at Whitesburg, Ky.’s prestigious Appalshop arts center (where he’s an editor and educator), struggling to find a way to reduce 30-plus years of family history into a 20-minute film. Another director told him that he needed to see everybody, including himself, as a character. The film started coming together.

“I Know You” gives you these three generations of men, fighting to put their pride aside, burdened by failures, but confronting them like a good man does. Parsons is barely in his 30s, and his movie is only 20 minutes long, but these characters can teach you a lot about being a man.

Parsons’s was a young father, and, according to Bruce’s mother, a doting one. He became a serious weightlifter, and the film shows his physical transformation from a skinny young man to a massive athlete. According to Parsons, this is when things began to change. His father had split with his mom, and, as frequently happens, he eventually left his son’s life, too.

When he resurfaced, Bruce was in his late 20s, and his father had gone through a profound change. He had long, curly hair and shoulders a mile wide, and he still walked with a swagger. In the film, he looks like he can lift a bus. And yet, his tone had changed. He was wise and introspective.

Near the end of the film, Parsons’s father says, “The worst thing about human nature is the preconception that we always have tomorrow to make everything right … that’s not necessarily true.”

The reasons for this transformation in his father are not altogether clear, and they are one of the pleasantly unresolved conflicts of the film.

The reasons for change in his grandfather, who had been known around town as a moody and confrontational man, are more straightforward. He’d experienced an illness, the death of a grandchild, and he was getting old — life had given him perspective whether he wanted it or not.

“I Know You” is part of KET’s Reel Visions series that highlights Kentucky-based filmmakers. It will premiere on Monday, Aug. 24, at midnight on KETKY, with three more broadcasts through the week.