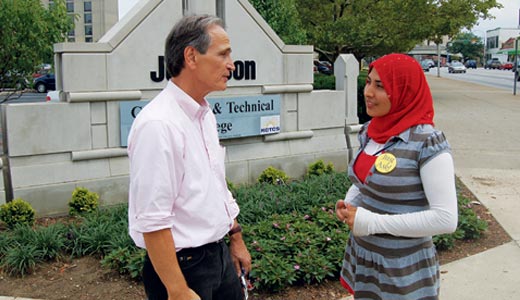 Dressed casually with a beautiful red hijab wrapped tightly over her head, Shaminah Paghmani, 21, says she remembers vividly why her 12-member family left Afghanistan, although she recalls little about the country itself.

The Jefferson Community and Technical College student works in the library at the college’s downtown campus. Last year she became an American citizen, after years of living as a refugee in Kentucky. Paghmani says there was a lot of pressure to learn English quickly once her family settled, but a series of special programs offered by the public school system and community college helped her fit in.

“I started from the lowest class because that’s where I scored. I didn’t have any background speaking English,” she says. “It’s not so difficult to explain things to people. It used to be in high school. They would think I’m a terrorist because I’m wearing this. But finally I knew enough English to explain to them.”

Arriving at the city’s doorstep from around the globe, an increasing number of immigrants and refugees are taking advantage of the various English as Second Language courses available across the Metro. For students and residents facing the language barrier, the community college, some nonprofit organizations and the county’s public school system have provided a tunnel system to help Louisville’s forgotten community get a foothold in American life.

“Language is their number one problem because that stands in the way of getting a job,” says Marc Cummings, coordinator of the JCTC ESL Department. “Apart from that the students often feel frustration that they have qualifications and training for jobs from their home country, but they can’t use it because they don’t have their English up to speed.”

Initially JCTC offered only three English courses for international students. Enrollment began to increase dramatically and college officials filled the demand by establishing an ESL Department, the only one of its kind in the state’s community college system.

The 33 classes offered range from basic developmental courses to English 101. The courses include reading, conversation, vocabulary, writing and grammar at different levels. Before students can take those credit-hour courses, however, they must pass a proficiency test to determine their current English level. Cummings says residents are still allowed to take the free English courses that the college offers, but without the credit hours.

The program has made the downtown campus an unofficial United Nations hub for Louisville’s foreign-born students. The department has students from every continent and over 60 countries, including Pakistan, India, Belarus, Vietnam, Somalia, Rwanda, Ethiopia and the Republic of Guinea.

The program often reflects the changing immigration patterns of the city, but the students themselves are a mixed crowd.

Some, like Paghmani, are refugees seeking asylum in the U.S. who don’t speak any English when they arrive. Others are professionals from other countries who moved to the U.S. to join family, but want to strengthen their English skills.

For younger immigrants and refugees arriving in Louisville who are still in secondary education, the transition can be difficult. Learning algebra while jockeying for a social position in middle or high school is next to impossible when you can’t speak the language.

Established in 1976, the ESL program offered by Jefferson County Public Schools helps international students assimilate into their new schools regardless of their fluency level. Students in the program attend mainstream classes with their English-speaking peers for most of the day, but also attend special courses throughout the semester.

Over 5,000 foreign-born students are designated as English-language learners in Jefferson County, says Marti Kinney, ESL coordinator for JCPS. About 3,500 students are enrolled in the program.

“They are as diverse a group or more diverse than even their American counterparts,” she says. “Some come with great academic backgrounds in their former country and others come without any opportunity to attend school in a refugee camp.”

For international students who are significantly behind, the school district established an ESL Newcomer Academy, which is an intensive study across all subjects, in the 2006-07 school year. After two to three semesters at the academy, the middle and high school students transition to a mainstream school with an ESL Program.

Many international students without any English-speaking skills come to the U.S. at an older age and are beyond the reach of the traditional public school K-12 education. In order to bridge that gap, a partnership between JCPS Adult Education and JCTC was established to create an Education Enrichment Services program for older immigrants ready to transition to postsecondary education.

Edgardo Mansilla, executive director of the Americana Community Center, says the partnership has helped tremendously in breaking the language barrier for all of Louisville’s foreign-born residents. The latest census data show Louisville’s immigrant population is 4.5 percent, but advocates say those statistics are outdated.

Americana works with other nonprofit organizations and area ministries to provide a spectrum of services for Louisville’s diverse international population. They hold monthly meetings with native English-speaking neighbors, and provide access to health care specialists and Metro Police.

Mansilla worries that beyond English services, however, immigrants and refugees have little to help them fully integrate into society. Many are living a double life, he says: One life still locked in their homeland and another in the city.

“For my generation, especially, the lack of services can leave you isolated,” he says. “You don’t know how anything works. You feel that you are less.”

The kids on the bus