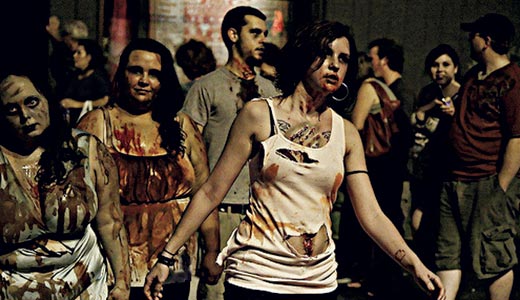 After learning of the close proximity of their birthdays a few years back, Louisville friends Mike Welch, Lyndi Curtis and John King had a brain blast: a big joint celebration for all three of them. Somehow zombies got involved after that.

The big joint celebration idea morphed into the Attack, where masses of would-be cannibals, outfitted in the blood-drenched garb of the undead, wander from the corner of Eastern Parkway and Bardstown Road south to Bearno’s Pizza for an after-party, frightening (and probably amusing) uninvolved citizenry along the way. The event is now in its fifth year and keeps picking up steam as more hearty flesh-eaters join the ranks.

“We had over 600 zombies last year, and the number of people just there to watch the event was in the thousands,” Curtis says. “We came around the corner at Eastern Parkway and we couldn’t see past the zombie crew. Once we got to Bearno’s, you couldn’t find a spare inch.”

Curtis says the restaurant will have a bit of a different set up this year to accommodate more people. Broadly stated, this go-round looks like a helluva lot of fun: There will be music from DJ Count Grozny and DJ Jake from the Record Store, zombie flicks provided by the Louisville Film Society, and awards for the “hottest” and “grossest” zombies, as well as the crowning of a zombie king and queen. Appropriately, tickets to the October run of “Evil Dead: The Musical” at the Alley Theater will be offered as part of the awards.

Welch attributes the growth in popularity to the fact that, damn it all, people just like to dress as zombies. He’s also happy they keep the event at the end of summer rather than a more obvious time like Halloween, helping preserve its unique flavor.

“There’s a great showmanship element to the event,” Welch says. “It gives people an out for performance, and it also shows people embracing a commonality. We’re really stoked that the community has received it so well.”

The organizers are also pleased the event has gotten so much support from the city. In the early years, its turnout was so low it was hardly a blip on the radar. Regardless, support from local law enforcement has always been solid. Curtis recounts an incident from the first year where a participant, dressed as a zombie hunter, was whacking the faux undead with a plastic sword. A police officer yelled over a loudspeaker: “Do not harm the zombies.” Let’s change that philosophy up a bit if they ever do attack.

Curtis and Welch say they are happy to keep doing the event as long as it stays fun. Curtis also takes the event’s popularity as a happy sign that horror movie geekdom is now something enjoyed by the masses.

“I think there has been a huge resurgence of horror movies, and younger horror movie fans have gone along with it,” she says. “It’s no longer like the nerdy guy going to the convention. It’s more rock ’n’ roll.”