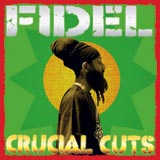 Crucial Cuts is a collection from more than half a dozen solo albums. Fidel began his career as frontman for “rasta punk rockers Todos Tus Muertos” (his bio’s description), though they add the word “legendary,” which must be as relative a term as the title’s use of “crucial.” Throughout the 17 tracks included here, Fidel proves his ability to make reggae and dub music, though none of it rises above the mark of passable. I found myself wandering almost instantly, no matter how many times I listened or adjusted the settings on the player. The album rarely reaches levels I’d call truly bad, but sometimes adequate is worse than bad. Bad implies a lack of understanding or ability to do a thing. Adequate shows that you know how to do a thing, you just aren’t very good at it. And as this is a “best of” collection — that his best is just OK (even with an appearance by Black Uhuru’s Mykal Rose), perhaps it’s time for a Todos Tus Muertos reunion.