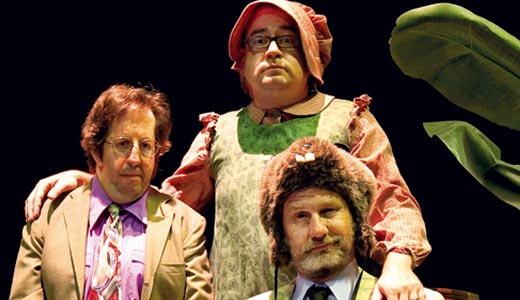 This was Chris Anger’s basic philosophy when his Louisville Improvisors put together the first Irish Hill Improv Festival last year: It seemed a grave injustice for one of Louisville’s oldest neighborhoods not to get more love.

Just to give you a taste: Irish Hill still sports some of the city’s oldest and most distinguished architecture, including the Nicholas Finzer House, built in 1869 and still standing. During the 1937 flood, the neighborhood’s high elevation made it a safe haven from the downtown floodwaters. Irish Hill residents spent weeks providing food and shelter for those fleeing the deluge (coulda used you a couple of weeks ago, guys).

Emphasizing history like this has been one of Anger’s guiding principles in organizing the festival for this year. He has recruited local historians Tom Owen and Clyde Crews to provide brief presentations on the neighborhood’s history, which the Improvisors will re-enact on the spot.

Anger has also wanted to extend community involvement with this year’s festival, and thus far, several businesses have been happy to shell out. The festival is being sponsored by Hurt Printing, the Irish Hill Neighborhood Association and Highland Coffee, where I met with Anger to discuss the festival, the daunting task of improvising an entire show and Irish Hill’s rich, alluring tradition.

LEO: What was it about Irish Hill that made you want to build an entire festival around it?

Chris Anger: You do a little bit of reading and you find out all of this interesting stuff about the neighborhood. If you know where the Walden Theater is on Payne, you go around the corner and you find the oldest building in Irish Hill. It was built way back when in the 1800s. The fact that that building is still there is one of the things I love about the neighborhood. It has a rich history.

LEO: Getting Owen and Crews to do talks is a nice touch. Do you know what they are going to talk about?

CA: We told them that we wanted them to do this talk and to not tell us anything about it beforehand. What will basically happen is, after they are done, I will say, “Thank you, that was wonderful and informative. We will now recreate the history of Irish Hill based on this information.”

LEO: The Improvisors have been together for 10 years, so you have an obvious level of comfort, but does something like this ever intimidate you?

CA: Not really. I’ve been working with (Improvisors member) Alec Volz for 11 years, and Josh Lane has been with us for a couple of years now. The key thing with improv is trust. I know I’m not going to let these guys down, and they aren’t going to let me down. It’s all about being in the moment. In everyday life, you might find yourself saying, “That is stupid, and I’m not going to do it.” In improv, you have to do it because it is all you have. Just embrace it and go with it and commit.