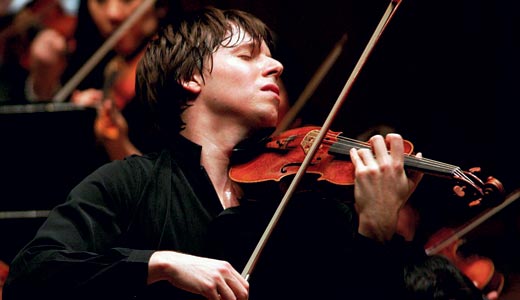 When Joshua Bell steps onto the Whitney Hall stage Sept. 5 to headline the Louisville Orchestra’s season-opening “Fanfara,” pretty much everyone in the house will recognize him as one of the most exciting violinists in the world, and classical music’s No. 1 box office recording star.

But away from the concert hall stage, Bell doesn’t have to dodge the paparazzi. As important as he is in classical music, Bell is not movie-star famous (even though he’s been right there with Brad Pitt and the guys on People magazine’s list of the 50 Most Beautiful Men). Life is interesting for Bell, but a little calmer than that.

“Even in New York, I can walk down the street without being mobbed,” he says. “It’s kind of nice not to be recognized every second. But that’s the best kind of fame to have, I think — to be appreciated by your peers, and known best by those most interested in what you do.”

Like Brian Greene, the Columbia University math and physics professor and best-selling author of “The Elegant Universe.” Bell recently played accompaniment to Greene’s words at the World Science Festival, as Greene talked about extra dimensions and hidden worlds in the universe.

“Lots of people are famous in their field who might not be known outside of it,” Bell says. “Brian almost invented string theory. That’s the latest theory of the nature of the universe. And, of course, the strings on my violin to go with his strings.”

On other days, Bell advances his own string theory.

Just this summer, Bell has performed for audiences from Sao Paolo, Brazil, to the Hollywood Bowl. He appeared live for a national PBS telecast of “Mostly Mozart” from the Lincoln Center in New York. We caught up with him by phone in Switzerland. At age 40, with a boyishly Beatles-like mop of hair, Bell is a star in a small world, with worldwide appeal.

The night before his Hollywood Bowl date (his ninth appearance in the 16,000-seat amphitheater), Bell appeared on the “Tavis Smiley Show” — with his violin.

That seemed kind of embarrassing, with the violin obviously added for identification. Like hanging a stethoscope on a famous doctor. But after Smiley chit-chatted about he and Bell being Indiana University grads, the talk to turned to Beethoven and such. And then the violin.

Holding his 1713 Stradivarius, Bell explained the spruce-top acoustics and secret varnish that make a Strad a Strad. Then he told the back story about this Antonius Stradivarius violin, which was stolen — twice! — from Polish virtuoso Bronislaw Huberman.

The first time in Vienna in 1919, the instrument was quickly recovered. But when it was stolen from Huberman’s dressing room at Carnegie Hall in 1936, the violin vanished. Half a century went by before an obscure musician named Julian Altman confessed on his deathbed in 1987 that he had been playing the violin for his own pleasure for 51 years, never telling a soul it was a stolen Strad. The recovered violin sold at auction for $1.8 million, and about eight years ago, Bell purchased it for $4 million.

What makes the story, of course, is the way Bell plays his treasured instrument — like the violin as a voice, carried on vintage varnish. Bell told the British magazine The Strad that he fell in love with the violin after playing just two notes. “You can tell it’s from (Stradivarius’s) golden period, because it has an ideal balance between the rich low end and the soprano high end,” Bell said. “Ultimately, playing it is like being a painter and having lots of colors from which to choose.”

But Bell doesn’t keep his famous fiddle in a vault. He even had it in hand one morning playing rush hour in a Washington, D.C., subway station.

The occasion was an experiment dreamed up by The Washington Post. Dressed in ordinary clothes, and with his case propped open for commuters to toss in coins and bills, Bell played the downtown stop like a street musician. The idea was to see if hurriers-by would recognize the player, or be stunned by his playing. Hardly anyone was. The story won a Pulitzer Prize.

But earning small change in a subway didn’t bother Bell, who seems to take things in stride — from a professional debut at the age of 14 with the Philadelphia Orchestra, to dating (for a while) Broadway singing star Kristen Chenoweth (“Wicked”) and finding his love life spread across the pages of the gossip rags.

Being from Bloomington, Ind., probably helps.

“I couldn’t have found myself in a more fortunate place for music,” Bell says. “Indiana University has the largest music school in the country, and one of the most sought-after violin teachers in the world — my teacher, Josef Gingold. People came from all around the world to study with him, and I just had to go down the street.

“And Bloomington was a great place to grow up, with a normal childhood playing basketball and tennis and all the normal stuff.”

As his concert career has flowered, Bell has reached for a broader audience. He earned a Grammy Award for “Romance of the Violin,” and delved into famous vocal melodies in “Voice of the Violin.” His playing of the theme for “The Red Violin” helped that movie earn an Oscar for music. Bell’s current hit recording of Vivaldi’s “Four Seasons” opened as Billboard’s No. 1 classical CD — and keeps selling. This fall he will release an album of duets called “At Home with Friends,” playing with performers largely outside of classical music.

For “Fanfara,” Bell was scheduled to play Bruch’s “Scottish Fantasy,” but has switched to Lalo’s “Symphonie Espagnole.”

Soloists are all over the place on the Spanish-themed “Symphonie Espagnole.” Some launch passionately into the thing — like Flamenco. But Jascha Heifetz gave it a much gentler airing. Our bet is Bell comes closer to Heifetz. But who knows? The interesting thing is concert audiences right now have the chance to hear him working out the Joshua Bell signature version.